Scientists have developed a novel system that uses micro-shockwaves to deliver drugs.

Biologists and aerospace engineers from the Indian Institute of Science (IISc), Bangalore have collaborated to create a pain-free drug delivery system that could also help battle a leading cause of amputation in diabetics.

Biofilm infections are a common cause of chronic foot ulcers in diabetics that can result in gangrene and eventual limb amputation. These infections occur when groups of microbes attach to a surface in another organism and encase themselves in a polymeric ​‘slime’ that makes them highly resistant to antibiotics.

“Biofilm infections are extremely dangerous,” said microbiologist Dipshikha Chakravortty, leader of the project at IISc. ​“They create a robust and rigid capsule that protects the bacteria from any kind of challenge we can give it. There’s no way the patient can get cured and it becomes chronic.” 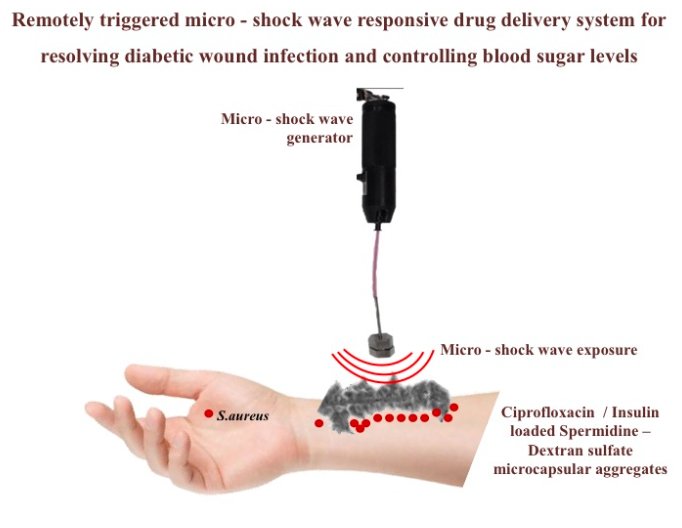 However, the new system developed at IISc could provide a novel way of treating these hard to shake infections. In a recent paper Chakravortty’s group described how they created 1‑micron spermidine-dextran sulfate capsules that can be loaded with a drug. A micro-shockwave generator — a handheld device that uses tiny explosions to create very small shockwaves — is then used to trigger the capsules to release their payload.

The system was used to deliver the antibiotic ciprofloxacin to mice with skin wounds infected by Staphylococcus aureus, a leading cause of biofilm-associated infections. Not only was the system effective, but the study also suggested that the micro-shockwaves themselves helped to disrupt the biofilm infections.

Three days after infection, the mice, which included both diabetic and non-diabetic animals, were treated with a 10µl dose of ciprofloxacin either administered directly to the wound or via the capsule system. A micro-shock was then applied to some mice, but not others.

“The reason seems to be that the shockwaves are doing a double job: somehow disrupting the biofilm infection but at the same time releasing the antibiotic from the capsule,” said Chakravortty.

Micro-shockwaves have previously been shown to have a positive effect on wound healing and angiogenesis — the formation of new blood vessels — but Chakravortty says the exact mechanism by which the micro-shockwaves disrupt biofilm infections is unclear. Her team has unpublished data backing up their role in treating S. aureus infections that should be released later this year.

The team also demonstrated the systems capabilities for insulin delivery using experiments on diabetic mice. Their results showed that insulin-loaded capsules exposed to shockwaves resulted in a decrease in blood glucose level comparable to that achieved with subcutaneous insulin injections.

Further experiments demonstrated that insulin-loaded capsules administered subcutaneously could be triggered to release regular doses of the hormone over at least three days. According to Chakravortty the system could reduce the number of injections a diabetic needs to receive their insulin.

The team is currently designing a patch that uses micro-needles to deliver the capsules subcutaneously as a painless and safer alternative to traditional hypodermic needles. The patch will also be divided into compartments so that specific doses of insulin can be triggered independently by a new micro-shockwave generator the size of a cigarette lighter.

“It’s a very convenient system. It’s not a bulky, you don’t have to go to the clinic every day and it’s not invasive,” she said. ​“The main advantage is avoiding needle stick injuries, which when you look at the long term can have side effects like thrombosis and infections, especially in diabetics who are very prone to infection.”