Vitamin‑D is essential for healthy bones, and helps us absorb vital nutrients like calcium and iron. It also plays an important role in regulating the body’s immune system. But too much vitamin‑D may be as harmful as too little of it.

Too little is bad for you and so is too much; you want your vitamin‑D levels to be ​“just right”. An optimal amount of vitamin‑D allows your immune system to exist in two phases that can switch back and forth as desired — a wartime phase to fight the foreign invaders attacking you and a peacetime phase to ensure that the same immune response does not destroy your own tissues. That is the take-home message from a new study by researchers at the Indian Institute of Science in Bangalore. 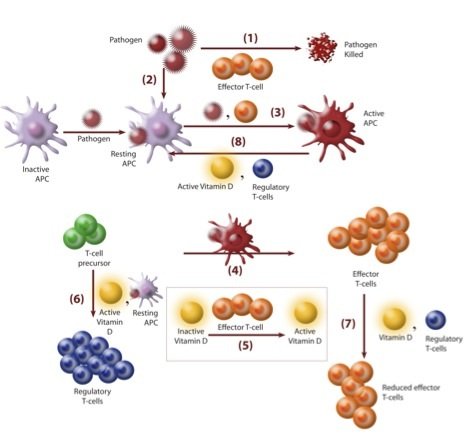 The laundry list of why vitamin‑D is important to us is impressive: it aids in the absorption of calcium, zinc, iron and phosphate, besides initiating the first line of defence against invaders, the innate immune response. It also has a crucial, but poorly understood role in the human body’s learned immune response.

The workhorses of the learned immune response against invading pathogens are T‑cells. ​“Naïve T‑cells can take two paths; they can either become effector T‑cells or regulatory T‑cells”, explains Susmita Roy, a graduate student and the first author of the study. Effector T‑cells fight pathogens, while the regulatory T‑cells dampen the immune response. In the absence of this much needed ceasefire, effector T‑cells destroy the body’s own tissues leading to autoimmune diseases. ​“We have to have a balance between the two. And this is where Vitamin‑D comes in”, she adds.

In order to better understand the role of vitamin‑D and its effect on T‑cell levels in the learned immune response of the human body, the researchers constructed a coarse-grained network model involving the interactions between all the participants in this military campaign against foreign invaders.

Explaining the rationale behind the research, Biman Bagchi, who led the team, says, ​“There are a huge number of experimental results coming in everyday about vitamin‑D. These studies do not really pin down what vitamin‑D does. What we needed was a quantitative model to understand its role in this kind of immune response.”

The results show that in the absence of vitamin‑D, not surprisingly, the immune response of the body is poorly regulated. What surprised the researchers was that in the presence of an optimal concentration of vitamin‑D, the immune system was most likely to exist in a bistable phase, robust to changing levels of pathogens. It allowed the production of a higher number of effector T‑cells when required, but once the pathogens had been dealt with, it sobered the action of these cells, thus making the immune system enter a new steady state.

The researchers also varied concentrations of vitamin‑D to evaluate its impact on how the immune system responds to hostile foreign agents. They found that the optimal concentration of vitamin‑D, one that led to the greatest bistability in the immune response, lies between 50 and 100 nmol/​L. This concentration range is also consistent with recommendations emerging from clinical studies.

In India, 69% of the people suffer from Vitamin‑D deficiency, while another 15 percent have insufficient Vitamin‑D, another recent study has shown. Unlike other vitamins, Vitamin‑D, a steroid, can be synthesized by the human body─it is produced when sunlight falls on our skin. It is also found in oily fish and cod liver oil.

Bagchi believes that autoimmune diseases like lupus and rheumatoid arthritis are spreading like epidemics and also suggests a cancer link. He says, ​“The medicines people take to treat these diseases suppress the immune system. If you suppress it too much, it can make you vulnerable even to cancer”. According to him, the focus should, instead, be on maintaining healthy levels of Vitamin‑D in the body.