Posted on Nov 21, 2014 in Health & Medicine and Nanotechnology

C‑reactive protein (CRP), produced by the liver and found in blood plasma, is used as a biomarker to indicate inflammation in the body. High CRP concentrations indicate a high risk of cardiovascular diseases and other infections. Hospitals use different methods to measure CRP, but these are expensive and lack specificity. A recent study by Ajay Sood, S Asokan and their graduate students S Sridevi and K S Vasu, from the Indian Institute of Science (IISc), may lead to significantly cheaper CRP tests with better sensitivity and larger sensing range. 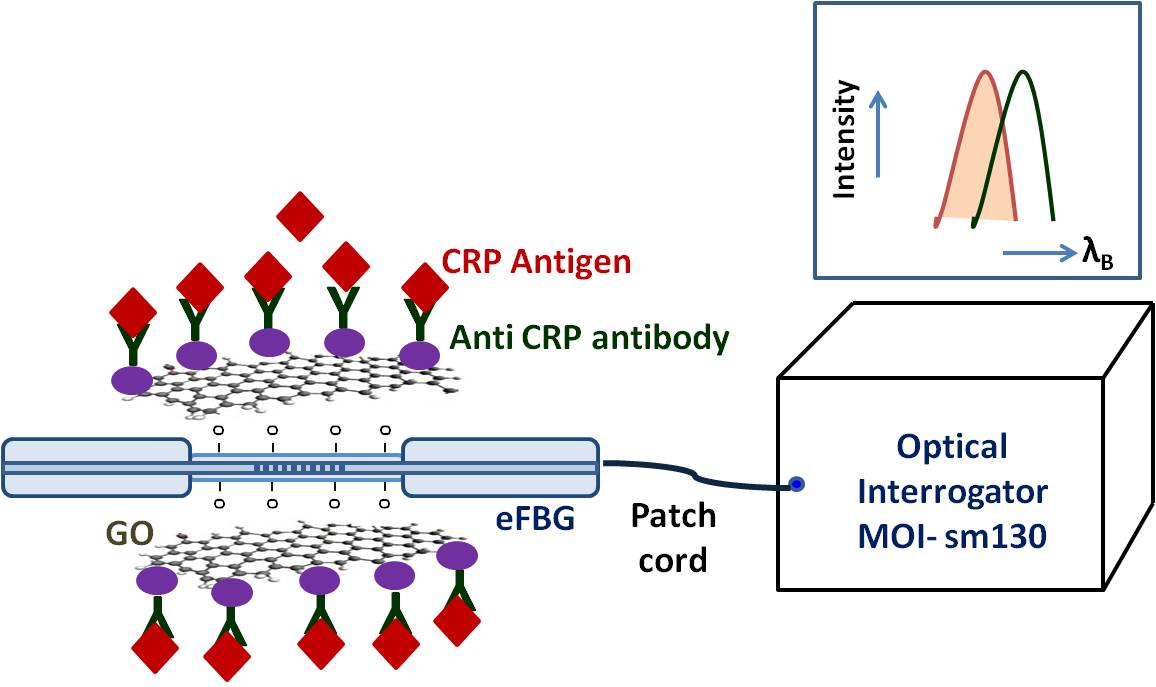 The researchers have developed a sensor platform that can accurately detect CRP concentrations over a wide range using etched Fiber Bragg Grating (eFBG) (a highly skilled make over of the optical fibers that enable high speed internet). It can be used to detect other proteins as well. The Fiber Bragg Grating (FBG) is a cylindrical tube with a ​‘core’ surrounded by a ​‘cladding’. The IISc research team had previously developed an etched Fiber Bragg Grating (eFBG) with a graphene oxide layer as the cladding. This had the effect of substantially improving the sensitivity, and made eFBG ideal candidates for biosensors. Taking this a step further, the researchers demonstrated the use of the eFBG with graphene oxide as a CRP detector.

FBGs have the remarkable property of reflecting a single wavelength of light among a range of wavelengths, and transmitting the rest. Which particular wavelength it reflects depends on its effective refractive index (RI) — a number that depends on the refractive indices of the materials used to make the FBG and the grating characteristics. For detecting CRP, the researchers have used an eFBG coated with graphene oxide and anti-CRP antibodies. When exposed to a test medium, the effective RI of the grating changed, leading to a corresponding change in the reflected wavelength. This change in reflected wavelength was found to have a linear correlation with the concentration of CRP. This method accurately detects and measures low concentrations of CRP, even in the presence of various interfering factors like urea, creatinine and glucose.

“The eFBG sensors are not new to the research community. What is new is achieving better sensitivity by using graphene oxide, a nanomaterial. We can use this platform for detecting various proteins by coating the graphene oxide with corresponding antibodies. The physics of detection remains the same”, explains Sood, Professor at the Department of Physics, IISc.

Unlike older detection techniques, this method is not affected by the colour and composition of the medium used in assays and is highly specific and sensitive. The portability of the equipment is crucial in a country like India. It helps provide better diagnostic services to those for whom visiting a hospital may be a challenge. ​“CRP test instruments used in hospitals are small enough to be carried easily. But they are expensive. The new platform technology can lead to instruments that can be made portable and cheaper”, says Asokan, Professor, Department of Instrumentation and Applied Physics and Robert Bosch Centre for Cyber Physical Systems, IISc.