The first in a series of ten interviews of, and about, Women in Science.

A vocal proponent of sustainable development and a seasoned crusader who has fought many environmental battles, Sunita Narain is currently the Director General of the Centre for Science and Environment (CSE) and the Director of the Society for Environmental Communications. She was a plenary speaker at the recently concluded Student Conference on Conservation Science – Bangalore 2014, where she took time out to answer our questions in her characteristically engaging and forthright manner. 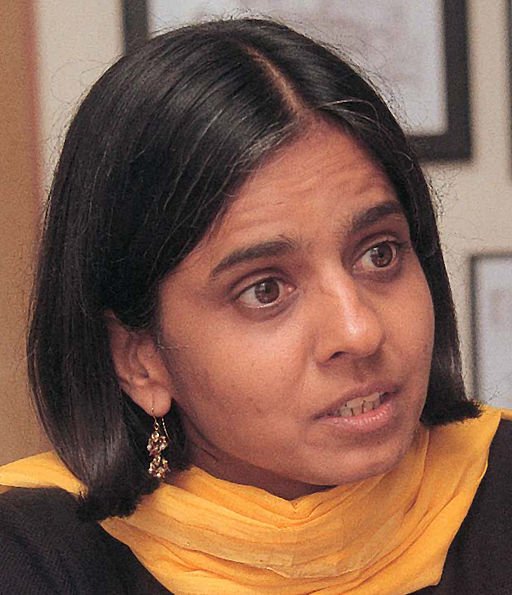 What or who inspired your career choice?
Anil Agarwal, the person I worked with at CSE really gave me a sense of both the wonder of environment and the purpose of our work. Anil was basically a journalist, and a mechanical engineer, but then moved on to become this country’s most important environmentalist and in my view, he did what none of us after him have been able to do, which is to make the very crucial connections between why a country like India needs to be so concerned about its environmental present and future. He definitely is my inspiration.

What is the most impactful issue/​project you have been involved in? Is there one issue that you currently champion that is keeping you awake at night?
It is difficult to say; we’re in so many different battles all the time. If I look around me and see the state of affairs, it is hard to say that any of us have made any impact at all. But on the other hand, you take some amount of courage from the little battles that you keep winning, even if you don’t win the war. One such, is the field of water harvesting, where one of our successes was to draw the attention of people to the issue and help them understand why we need to care about traditional systems of knowledge. There is also the whole issue of decentralized water, which today has become a buzzword. I know how difficult it was when we raised it in the mid 90s and everybody rejected it saying it was an antiquated idea, which just won’t work.
But most people in the field will agree with me when I say that our work is a continuum. You just have to keep at it and focus on all the problems that need to be worked on. People in my field abroad are able to take a ​“unifocus” view of the world and their work. I find in India, we can start with a focus, but as we get into any issue, it opens up and gets broader and broader.

Who are your women role models — not necessarily in science?
My mother. Most women relate to this answer, however clichéd. In my case, she was particularly important, because she single-handedly brought up four of us. I saw the adversities that she faced, but I also witnessed extraordinary courage. I always say that if I didn’t do what I did, she’d just come back and kill me.

Do you think young women need/​benefit from older women mentors? Do you think women need to be mentored differently from men?
No! I don’t think women need to be mentored differently. I don’t think women need women mentors. I don’t think it matters in my field whether you are a woman or a man. I don’t think we have the excuse any more to say that we cannot do something. We are very bright — some of the brightest people I have worked with are women. We are very dedicated, very honest to our work and we have the ability to succeed. I am very clear about this. I can’t be a hypocrite about this because I run an institution of 150 people, half of which are women. I make it very clear to the women who work with me that they get no privileges. They travel as rough; they do whatever it takes to get the work done. And they do it, and enjoy it. I think about myself in this context as well. I come from a background, which has four generations of literate women. Now, with that kind of privilege, how can I ask for special favours?

Does your organization have a cell or policy to address sexual harassment and related issues? Are employees aware of these policies?
Absolutely. We have a no tolerance policy. If there are any problems, we have a committee, much like the Vishaka guidelines. We do whatever it’ll take, but the bottom line is ​“no tolerance”. Young women starting out with the organization know they are safe.

What are the structural roadblocks that impede progress of women environmentalists/​researchers?
I think there are some problems unique to women scientists for sure. It’s a little difficult for me to say because I’m a little bit of an outsider. But if you look at it, the top in Indian science is made up of men, specifically, older men. I’ve often asked this question: what is the real barrier? Why are women not making it to the top when it comes to Indian science? It’s not the case in medicine, law and many other professions. Indian science needs to introspect. Why is there a glass ceiling?
My own sense is, because it is very conservative, it is highly structured, and is basically very arrogant. Most people feel extremely inhibited when they talk to Indian scientists because they look down upon them. And I think as women, it is probably even tougher to deal with such an environment. It is not so much the case with conservation science, but definitely with mainstream Indian science. There is really something fundamentally wrong.

Have things become better since you first started your career? In what respects?
In my generation, we were much more, for want of a better word, genteel, about making our space, and careful and cautious and trying to make sure that we widened our space slowly. I don’t think Indian women today have to do that, and I’m thrilled about it. I see that many of them today have no need for that kind of genteelness. They’re there; they’re there to be taken seriously; they want to be treated as an equal and are very clear that they are not going to be pushed around. I think that this is fantastic and will make huge changes in the years to come.

One change that, in your opinion, would hugely benefit women researchers?
It’s always marriage, or children that people bring up in this context. I don’t think that’s the issue any more. I think openness within institutions would help most. I think it’s the weakening of Indian Institutions, which, if at all, will lead to a lack of spaces for Indian Women. We don’t have a problem where the Institutions are strong, vibrant, dynamic and open.

One piece of advice that you wish someone had given you way back when
To be politer.