Posted on Nov 12, 2014 in Women in Science and Personal Experience

In a week-long program initiated and funded by the Indo-US Science and Technology Forum and the Department of Science and Technology (DST), India, and held at NIAS, Bangalore, the interactive sessions were run by a grassroots organization called COACh (Committee on the Advancement of Women Chemists). Anjali Vaidya gives us a sneak peek into some of the interactions at the conference and shares some excerpts from her conversations with Geraldine Richmond, the chair and founder of COACh.

There is something extraordinary about being in a room overflowing with women scientists. Every one of the thirty individuals from across South India attending the career building workshop for women scientists held at the National Institute for Advanced Studies (NIAS), Bangalore last September represented a statistical improbability, sometimes decades of lonely struggle within a system where the odds are stacked against them. These women are path-breakers, paving the way for every young girl out there with a budding interest in astronomy or neuroscience. And every one of these women has a driving passion that they have made the core of their lives, with or without institutional and familial support, and it shows in the vibrant debate that fuels the workshop. 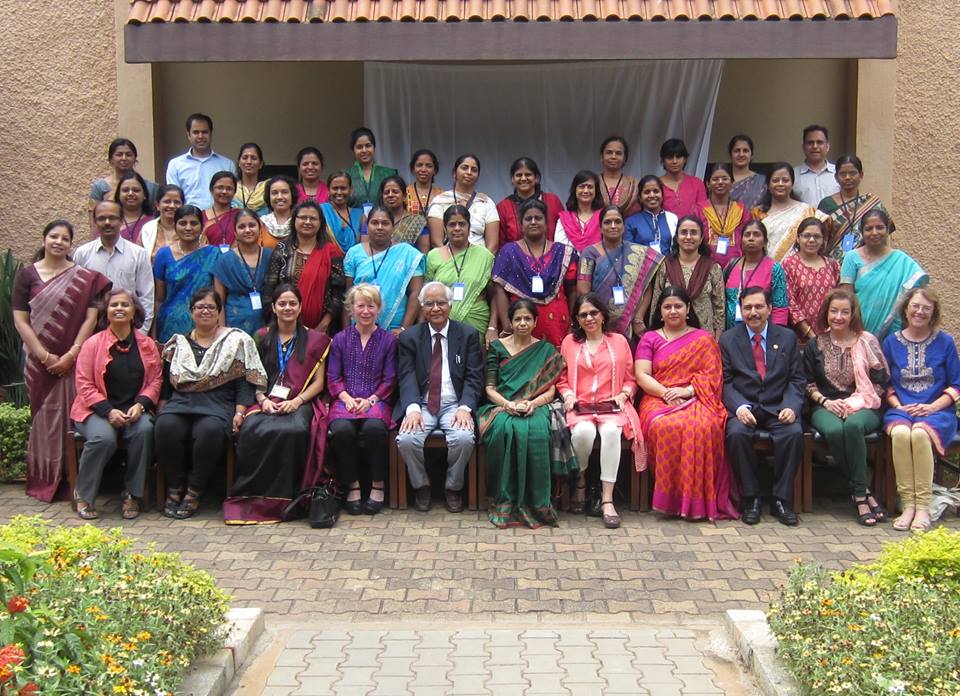 The interactive sessions of this week-long workshop are being run by a grassroots organization called COACh (Committee on the Advancement of Women Chemists), in a program initiated and funded by the Indo-US Science and Technology Forum and the Department of Science and Technology (DST), India. COACh was initially aimed at female faculty in chemistry departments across the United States, conceived and started at the University of Oregon in 1997. As the group has grown over the past two decades, however, its target audience has steadily expanded. COACh has held workshops for female scientists and engineers in Latin America, Africa, South-East Asia and now India, with the aim of helping women across the world negotiate the academic workplace and advance their careers.

sor of Chemistry at the University of Oregon and the chair andfounder of COACh. ​“Everyone in the US tends to fund programs – or did when we started COACh – for girls still in school.” What she found, however, was that even as women emerge as independent researchers, their problems are only just beginning. The girl inspired to go into science still has a high chance of lagging behind at the upper levels as the woman denied promotions and funds.

“I was tired of seeing women mistreated,” says Richmond. ​“In academia, I saw men the same age, with the same qualifications [as the women] getting awards, getting jobs, being able to go to international meetings. And it just didn’t seem fair.” Women in science do not just face a glass ceiling, in Richmond’s opinion. ​“I call it a polycarbonate ceiling,” she says. ​“You can’t break polycarbonate.” But this has

not stopped COACh from trying, and follow up studies with past participants suggest that their efforts are making a difference.

“Over 95% [of those surveyed] say they’ve mentored others with our techniques,” says Richmond. ​“A huge number have said that we’ve reduced their stress levels. They go on and say what specific negotiation techniques they have used, what has been effective, based on what they remember from the workshop five years ago.”

Adapted for the scientific workplace from the corporate world, the strategies that COACh has developed for negotiating a tricky professional environment have broad applications. Indeed, in some countries in Africa the sessions have had equal attendance from men and women. The workshops have been refined over the past 15 years, however, to cater specifically to the problems that women scientists tend to face in the workplace, addressing the challenges of negotiation, communication, leadership and mentorship through interactive role-playing, case studies and debate. At the five-day workshop in Bangalore, sessions were added on career balance and finding role models, on publishing and proposal writing. Three of the speakers in these sessions were from COACh, but the rest were drawn from senior women scientists at academic institutes in Bangalore.

Many of the problems that COACh addresses faced by female scientists in the workplace are universal. Pushpalatha Murthy, professor of Chemistry at Michigan Tech, Program Director for the NSF GRFP and COACh faculty, shared data from studies in the US in the past two decades that suggested gender-based discrimination was holding women back in their professional careers. One survey of faculty at MIT in the mid-1990s showed that across the board, men were more likely to receive higher salaries, promotions, resources and awards than women with equivalent professional accomplishments. A more recent study published in PNAS in 2012 found that scientists of either gender tended to rate identical job applications higher if they came with a male name rather than a female name. Another study (discussed by Facebook COO Sheryl Sandberg in her book Lean In)found that changing the name of a venture capitalist named Heidi Roizen to Howard caused business school students to rate her accomplishments in a positive light. As a woman, by contrast, her leadership qualities became signs of selfishness and aggression.

There was frequent cathartic laughter as participants, organizers and speakers alike shared war stories over the course of the week, the scars they had accumulated and hard lessons learned as women navigating a scientific establishment that is weighted against outsiders. One participant admitted that she had never been able to find an individual willing to help her through the system. ​“I am my own mentor,” she said. Another said that although after marriage her husband was supportive of her career, ​“My problem was convincing my work place that my personal life was also important.” Vijayalakshmi Ravindranath, Chairperson of the Centre for Neuroscience at the Indian Institute of Science, Bangalore, spoke of the isolation she faced after moving to Bangalore in the 1980s. ​“I didn’t get a single grant from the government till I got my Bhatnagar award,” she said.

Two women from ISRO (the Indian Space Research Organization, Bangalore), one with thirty years of work experience under her belt, wondered how there could be so many capable women in their organization but so few in leadership positions. ​“We are given equal opportunities, but what is lacking that we are not at the highest levels?” asked one woman.

Indeed, what is lacking? The glass ceiling that bars women from the upper echelons of the scientific establishment is complex, tied up with centuries of baggage. As the studies mentioned above show, however, the status quo is maintained in part via unconscious biases in both women and men that can be countered and changed. One of the best ways to remove gender stereotypes and create positive female role models for younger women would be to have more women in senior leadership positions in science, but women need to get there first.

Several elements are necessary to bring more women to the top of their fields. One that Richmond repeatedly stressed was the importance of younger women making connections with older scientists, building mentor relationships and networks. She herself pieced together role models based on male professors and female peers. ​“You don’t have a full library of books to pick from to give you direction,” she says. ​“What you can do is pick chapters from here and there.” Building networks can likewise be a long, piece-meal process. The COACh workshop emphasized three levels of networks that are necessary: support networks of family and friends, professional networks, and finally aspirational networks of where you want to be in ten or twenty years. This last network is one that tends to be missed by women, says Richmond, because many women in science are preoccupied just trying to stay afloat. ​“You need to workto get up to that [aspirational] level, and you need to have people to help you get there,” says Richmond. ​“But if you don’t start recognizing that as a goal when you’re thirty or forty, it’ll be too late when you’re fifty.”

Likewise, effective negotiation, communication and leadership skills are necessary for women to move forward, but do not come naturally to everyone. Rather, these are skills that can be learned and strengthened over time. Richmond emphasizes that for women, learning how to be a good negotiator and leader does not mean mirroring the behaviour of men. ​“As women, we are ahead of the curve if we just embrace the styles that we’re comfortable with,” she says. ​“The most effective leaders today are ones that areempathetic, that want to work as teams [and] reach consensus.”

Beyond such strategies that work at the individual level, structural changes within institutions are also necessary to remove the gender bias in science. Pushpalatha Murthy spoke, for instance, of her work at Michigan Tech to improve institutional support for women with young children. Speakers at the COACh workshop with work experience from the US complained about the lack of sufficient maternity leave there, whereas those in India spoke of difficulties negotiating for flexible work hours to accommodate family needs. All agreed that taking a break for childcare and elder care causes undue damage to the careers of both men and women, making it difficult to find an adequate work-family balance. Rohini Godbole, professor of Physics at the Indian Institute of Science, Bangalore, suggested that for a woman to achieve a happy marriage, happy family and successful career all at once can be a matter of chance. Laura Greene, professor of Physics at the University of Illinois, Urbana-Champaign, and mother to nine children, laughed as she described her everyday life as chaotic. Sumati Surya, professor of Physics at the Raman Research Institute, Bangalore, spoke of her efforts to bring her passion for physics home with her, so that her family stayed aware of the importance of creative research in her life.

For every such woman that possesses that combination of talent and determination to pursue a successful career in research, however, there are dozens more who might have made significant contributions to science but were turned away or stalled by an unsupportive if not directly hostile system. ​“There are battles all the way along,” says Richmond. ​“And the reason for COACh is that we found the battles got harder once you started to run faster and throw harder than the men. Because then jealousy can surface, followed by resentment. Our goal with COACh is to help women develop strengths and strategies so that such effects do not diminish their passion for their science.”

The focus of the workshops is to be a catalyst for lasting change. The organizers’ aim is two-fold: on the one hand, COACh workshops serve as sites for women scientists to forge connections with each other, planning for future conferences and collaborations. They also serve, on the other hand, as vehicles through which to turn participants into teachers, refining strategies for dealing with the scientific workplace to suit local needs.

“We offer these workshops, but then we say ​‘Take all of our materials, because what we want you to do now is to take these home and offer them to your students and to your graduate students,’” says Richmond. ​“I would say if there’s any message from all the things we do, it’s how to help women take control of their lives.”