Posted on Mar 29, 2016 in Health & Medicine and Biotechnology

Transgenic plants have emerged as an important tool that can be used to express certain molecules so as to increase the nutritional value of food. In a recent study published in Nature Scientific Reports, a team of researchers adopted metabolic engineering to enhance production of a certain class of flavonoids — a group of plant metabolites, found in a variety of fruits and vegetables — and make them available for daily consumption. The study focused on the effects on bone health in female mice from consuming genetically modified tomato, expressing higher amounts of flavonols, which are known to have estrogen-like properties. Upon feeding an extract from the transgenic tomato to pre-pubertal female mice for 6 weeks, the animals were reported to have increased ​“chondrogenesis”, or development of bone cartilage, as well as elongated and stronger bones. The work was a collaboration between the research groups of Prabodh Kumar Trivedi and Ritu Trivedi at CSIR-NBRI, Lucknow and CSIR-CDRI, Lucknow respectively. We asked Ritu, why flavonols and why tomato?

“My previous studies on independent flavonols, like kaemoferol, rutein and querceitin had shown some bone forming activity,” she explained. Flavonols have protective health benefits against osteoporosis, cancer and cardiovascular diseases. Tomato, being an economically viable and commonly consumed food, seemed a suitable choice for nutritional enrichment with flavonols to fight diseases. Ritu clarified further, ​“Due to the short generation time of tomato, it has emerged as a study model for development and ripening of fleshy fruits. So it has a long history of physiological, biochemical and molecular investigations as well as advancements in genetic and molecular tool kits.”

The authors first expressed a transcription factor, AtMYB12 — a protein involved in the process of converting, or transcribing, DNA into RNA — from a small flowering plant, Arabidopsis thaliana, to enhance production of plant metabolites like flavonoids in tomato. Analysis of extract from the transgenic fruit showed increased quantities of independent flavonols and other phenolic compounds. The authors then tested the effect of consuming this extract on the general physiology of animals and measured various parameters for assessing animal health. For example, the effect on body weight was insignificant, and toxicity assessment using liver histology showed no differences from other control group animals. Animals also did not show increased expression of adipogenic, or fat-forming, cellular markers. This step confirmed that the side effects of consuming flavonol enriched extract over a length of time were minimal.

Bone formation was initially assessed by measuring overall bone length in tibia and femur (hind limb bones). Mice fed with transgenic tomato extract had elongated bones compared to control group animals. Apart from this assessment, a host of parameters for analysing bone growth plate were measured: effect on hypertrophic chondrocytes, COL10a expression, mRNA expression levels of cells in growth plate and X‑ray imaging with micro-computed tomography (μ‑CT) of bone architecture were also performed. Hypertrophic chondrocytes are enlarged, differentiated cartilage cells and can be identified using COL10a as a protein marker. These cells, along with multiplying chondrocytes, form the core of the growth plate in growing bones. In a bone tissue sample, enlarged hypertrophic cells, along with increased expression of COL10a would signify bone development. Similarly, mRNA markers for dividing bone and cartilage cells would also show up in larger quantities in the growth plate as compared to resting or non-dividing cells. 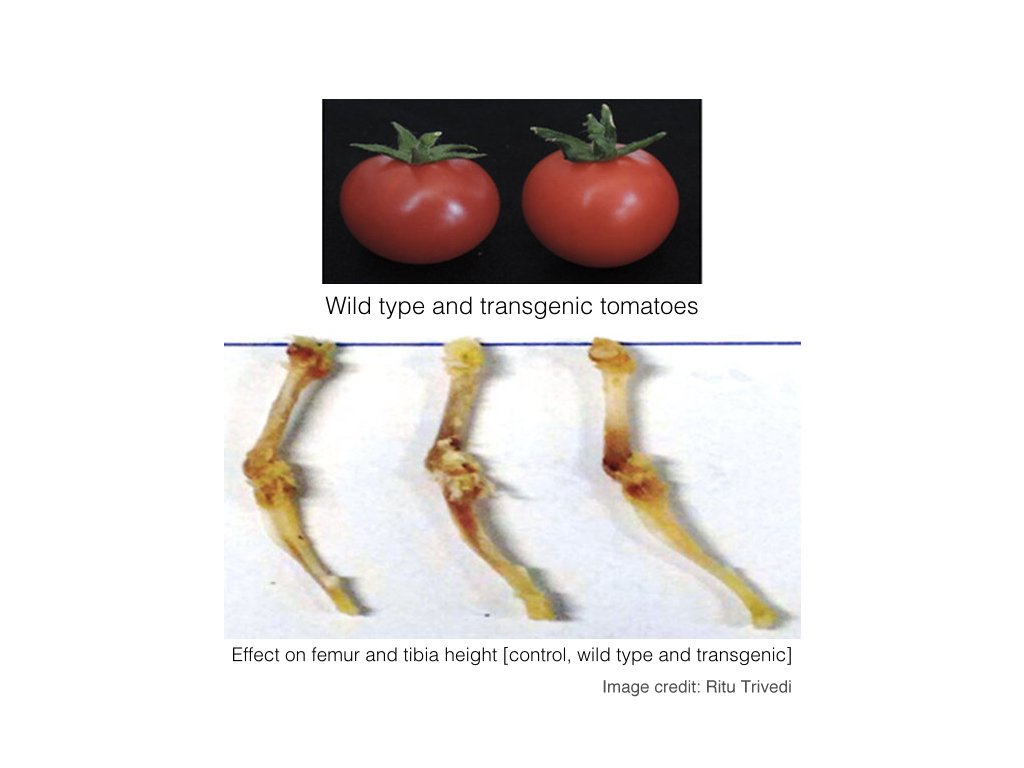 Bone growth analysis using these parameters showed an increase in both size and number of hypertrophic chondrocytes in mice given flavonoid containing extract. The connective tissue density in bones increased, with an overall increase in bone volume as confirmed using topographic images (μ‑CT analysis) from the hind limbs. Concurrently with a decrease in porosity in chondrogenic (cartilage) tissue, this implied increased bone strength and an overall positive effect on the quality and health of bones. The authors conclude that consumption of such engineered plants can help growth defects in adolescent female animals, such as short height and peak bone mass achievement. This study is another step in showing how transgenic plants can be used.

Since these plants are genetically modified, we also asked questions concerning their effect on soil and how the GM field would evolve. ​“We have not done these trials in fields,” Ritu said, ​“The data in this study came from plants that were grown in the glass house. However, nothing special is required and they grow in the same environment and soil as the wild type plants. Many of the molecules that can be expressed in plants are species specific and geographically limited. Since they are important in mitigating so many diseases, the need to have these molecules in daily consumption should push the field to expand more.”