Posted on Jan 30, 2015 in Neuroscience and Biophysics

This article was first published in NCBS news and is reproduced with permission from the NCBS news team.

Insects are a thriving group of organisms that have succeeded in colonizing different types of habitats. They owe much of their success to the evolution of flight. The first wings to developed in insects were mere extensions of cuticle from the thorax; the segment of the body between the head and the abdomen which supports legs and wings. These simple wings later evolved and developed advanced mechanisms which have enabled insects to perform complex aerial manoeuvres. 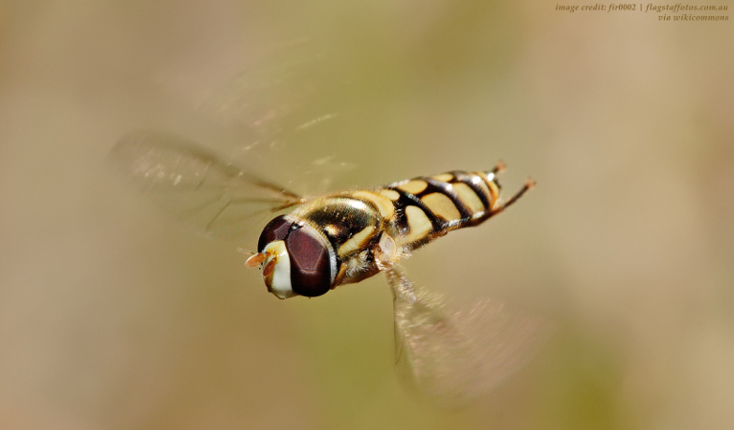 Evolutionary adaptions in insects have resulted in unique flight related physiological and biomechanical features. In primitive insects like dragonflies and mayflies, flight is achieved through the direct action of the nervous system and muscles. On receiving nerve impulses, the muscles work in tandem to move the wings up and down. However, small-sized winged insects, need to flap their wings at frequencies higher than 100 Hz to be able to fly. Achieving precise control and coordination of the wing and body movements is a challenge as their wing beat frequency is much higher than the frequency at which nerve impulses can be transmitted. Yet, the wing movements in flies are fast and precise which has stimulated a great amount of interest among scientists.

In a recent study published in Proceedings of the National Academy of Sciences, Dr. Sane and his students, Tanvi Deora and Amit Kumar Singh have identified mechanical connections in the thorax, that help a fly achieve high levels of co-ordination between its wings and halteres. Halteres are knob-like sensory structures that have evolved from the hind wings in Dipteran flies. They are essential as balancing organs in flies; rather like the inner ear system in humans and for maintaining orientation in flies during aerial manoeuvres. Halteres thereby inform the wing about sudden changes in the fly’s aerial trajectory. Halteres oscillate at the same frequency as that of the wings but in the opposite direction. The paper describes how halteres manage to maintain their precise timing relative to the wing at very high rates.

The study consisted of a series of experiments on soldier flies (Hermetia illucens) and flesh flies (Parasarcophaga dux). The experiments revealed the wing-wing and wing-haltere motion was coordinated by mechanical linkages in the thorax and not by the nervous system as these could be coordinated even in dead flies. Detailed observations identified that a cuticular structure called scutellum spanning across the thorax links the two wings at their bases. This linkage helps move the wings in-phase with one another. When the scutellum was severed, the movement of the two wings was disrupted, confirming the necessity of scutellum linkage for wing-wing co-ordination. Similarly, the base of each haltere is linked to the base of the wing on the same side of the thorax by another strip of cuticle. This sub-epidermal link helps the halteres to maintain its movement in a direction opposite to that of the wing. When the sub-epidermal link wing haltere link was disconnected, the anti-phase coordination between the wing and haltere was lost. However, the other haltere with intact links remained vibrated in coordination with its neighbouring wing showing that the wing-haltere links on both sides of the thorax were independent of one another.

This study further examined the mechanism behind the ability of some flies to move or vibrate a single wing while the other one is kept folded. This behaviour is commonly seen in male fruit flies (Drosophila melanogaster) while courting females. With wings being connected to one another through mechanical linkage, the researchers proposed the presence of a clutch like structure at the base of each wing that would disengage the wing from the mechanical linkages enabling the fly to move only one wing. When the clutch is engaged, the two wings flap together but when the clutch of one of the wings is disengaged, it remains folded while the other one continues to flap.

Observations of the wing base during flight using high speed videography also revealed the presence of a structure similar to gear boxes in automobiles. These gear boxes help the fly control the amplitude of each beat. The gear box in the flies was found to consist of four grooves that functioned in four different modes, facilitating an increase or decrease in the amplitude of the wing’s movement. The gear box helps the fly to shift from highest amplitude to low amplitudes or vice versa within a single wing stroke which is useful when the fly starts or halts its flight.

This study demonstrates the existence of a passive coordination between the wings and the halteres that is not influenced by the nervous system or muscles but controlled by mechanical structures in the thorax.