A novel wastewater filtration technique developed by a team from the Indian Institute of Science (IISc), Bangalore recently won first place at the Google Pitch Fest in Switzerland. The technology is particularly designed to benefit people in remote and disaster-hit areas that have sources of water, but none that are fit for drinking. No water is wasted in the process, and no membranes or chemicals are used.

“My background is in device physics and circuits. I haven’t really worked in the water technology area before this,” said Sanjiv Sambandan, Assistant Professor at the Department of Instrumentation and Applied Physics, ​“but when I started my lab, one of the ideas that we discussed was to use electric fields to purify sewage water.” The proposal got a small amount of funding from IISc. The idea uses the understanding of how particles behave in electric fields. If one disperses particles in any fluid — and if there is a permittivity or conductivity difference between the particles and the fluid, the particles will polarize in an electric field. The polarized particles have an attractive force, which will cluster these tiny particles into larger clumps. Using this along with other phenomena that aid clustering, these larger clumps can be removed with a very low-cost sieve, without the need for a very fine membrane. 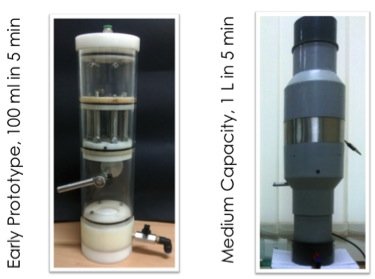 The system was initially built on a small printed circuit board as a proof of concept. At that time the throughput was one microliter a minute, which is essentially a tiny droplet. The big challenge was in scaling up and building a technology that could purify a few hundred litres of water within an hour. ​“The engineering behind increasing the throughput while maintaining a low energy currency has been, in some sense, the most important stride in our work,” said Sambandan. What this took was more a psychological change than any adoption of new techniques.

There exist technologies that can achieve a high level of purification of water. However, these technologies are expensive and don’t lend themselves well to very remote settings or disaster-hit areas, which suffer from limited accessibility and little or no electricity. The question the team asked was: ​“can these people themselves build a water filter from locally available materials that achieve this goal?” They worked backwards keeping in mind the limited resources that may be available in these settings. Sambandan acknowledged that, much to their surprise, the throughput improvement came about when they peeled off unnecessarily fine precision requirements and started working with a crude set-up. ​“That, in some sense, led to a nice optimization of the engineering problem,” he said.

While the technique is not as good as the reverse osmosis technology, it meets potable water standards — it can remove sub-micron particles, metal oxides, hardness, all coliform bacteria, and also corrects for pH to some extent. The system also desalinates the water to a small extent. A 1‑litre water bottle can be purified in just 5 minutes, powered by batteries, a hand crank or a small solar cell.

For all of the trial demos, the team used Mavallipura bore water, which is known to be extremely contaminated, as the trial source. Currently, they are running a pilot project at the IISc sewage plant. This project is supposed to treat 500L an hour of sewage water. They plan to set up constant testing by several labs, which regularly do water testing with potable water standards and observe how the various contaminants evolve with time. Plans for a larger social project at Mavallipura are also in the pipeline.