Posted on Jul 02, 2014 in Health & Medicine and Biotechnology

Scientists identify a DNA-binding protein in the tuberculosis bacterium that can be used as an effective drug target — an important first step towards finding drugs to battle the dreaded disease.

Tuberculosis is a medical diagnosis that can send chills down one’s spine. It is a debilitating disease with a long recovery period. Antibiotics were the miracle cure until the emergence of multi-drug resistance (MDR). According to a WHO report, India had the largest number of TB cases in the world in 2012 — with over 2 million people infected. Obviously there is great need to find better treatments and drugs that work against the tuberculosis bacterium, Mycobacterium tuberculosis. 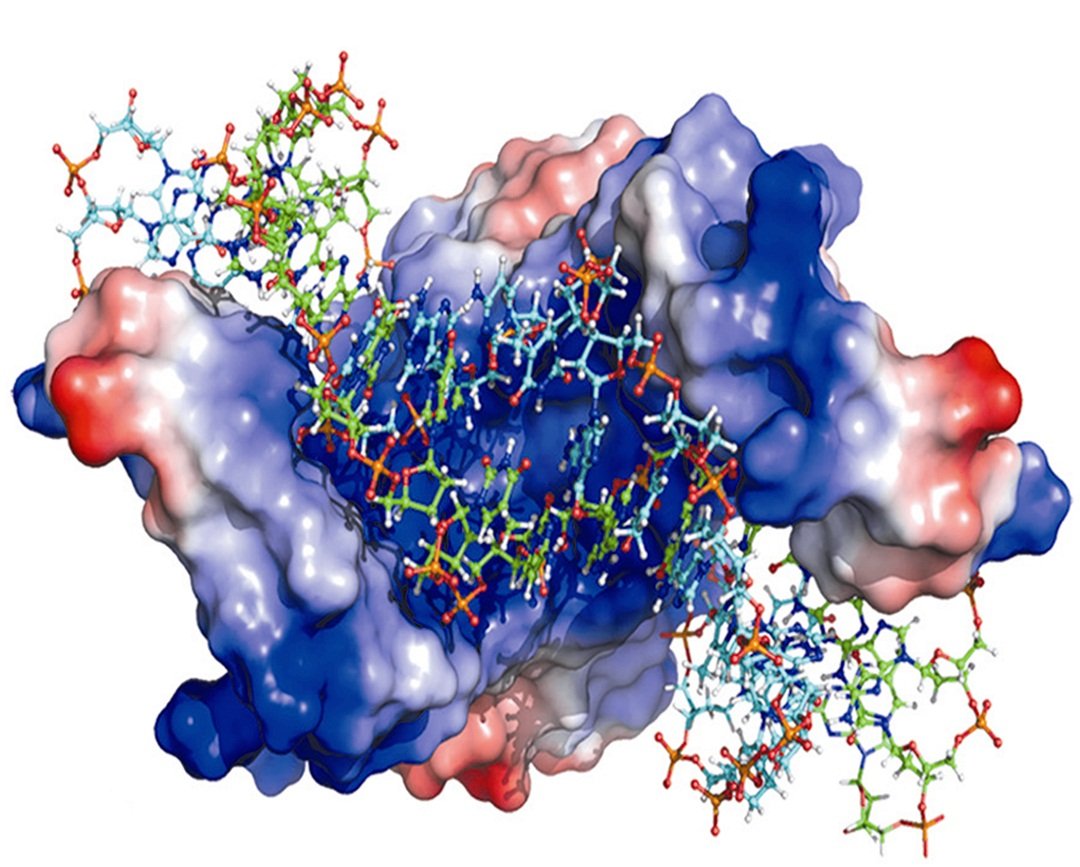 A recent article in Nature Communications provides a proof of concept study towards the identification of a potential drug, and a drug target in M. tuberculosis. The research groups of Suryanarayanarao Ramakumar and Valakunja Nagaraja at the Indian Institute of Science (IISc) deviated from the traditional path of studying metabolic enzymes as drug targets and focused on a structural protein named HU instead.

A typical bacterial genome is several million base pairs in length compacted into a bacterium only 1 – 5 microns in size. Such condensing and packing of the genome is achieved by proteins similar to eukaryotic histones, imaginatively called Histone-like proteins in prokaryotes. The HU protein is one of the important members of this family. The proteins bind to the DNA like little beaded clamps. As they bind and interact with one another, DNA bends and gets compacted. If the binding of the M. tuberculosis HU (MtbHU) to DNA is disrupted, then, DNA stability is affected which will directly impact survival of the bacterium.

To inhibit the binding of MtbHU, it was first necessary to gain a clear understanding of MtbHU protein structure. To that end, the team overexpressed the protein in E. coli and crystallized it for X‑ray diffraction studies. As they elucidated the structure, it became clear that saddle-like pockets of the protein interact with the DNA. Small molecules could now be designed specifically to target these pockets. So began a fishing expedition through a library of compounds that could potentially inhibit MtbHU binding to DNA. Of these, two trans-stillbene derivatives, SD1 and SD4 showed promise. They effectively inhibited protein-DNA binding in Electrophoretic Mobility Shift assays. ​“SD1 was a better inhibitor of the bacterial cell growth in our inhibition assay”, said Soumitra Ghosh. Further NMR studies also clearly showed their binding to the protein.

The small molecule binds at the ​‘core’ of the MtbHU’s DNA-binding pocket. This inhibits the MtbHU-DNA interaction and disrupts the nuclear architecture there, which is shown to be detrimental to the bacteria. The target site of the DNA binding pocket of MtbHU ​“acts like an Achilles heel for the protein”, explained Tuhin Bhowmick.

This is the first study clearly showing that a DNA binding protein, like HU can indeed be used as a drug target, thereby opening the doors towards developing others. The authors are the first to acknowledge that they are still a long way to developing a drug. Despite this, it surely is a step in the right direction.