Scientists at CSIR — Indian Institute of Chemical Biology (IICB), Kolkata have reported surprisingly high levels of arsenic in locally grown rice, resulting in genotoxicity. Genotoxicity can be explained as the damage to our genes caused by various chemical agents. Arsenic is a potentially genotoxic agent that may cause skin lesions, pigmentation, chronic bronchitis, liver fibrosis, chronic obstructive pulmonary disorder, hypertension, liver fibrosis, oedema of hands and feet, anaemia and most prominently malignancies or cancer. Arsenic is a very common component of various pesticides used in agricultural fields. The risk of increasing arsenic levels in ground water and soil, due to its prolonged agricultural use, has been known for a while now. However, arsenic levels in rice have only recently come into the picture. A.K. Giri at IICB and his team have conducted a thorough study in rural West Bengal and conclusively demonstrated genotoxicity as a result of high arsenic content in rice. 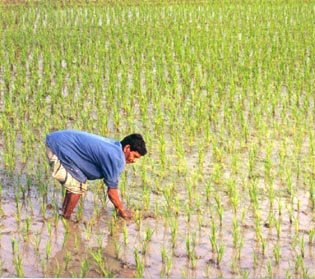 The researchers observed a vast variation in the arsenic content of locally grown rice. The concentrations varied between 100 μg/​kg and 300 μg/​kg. Hence depending on the concentrations of arsenic in the rice consumed, the cohort of 400 human subjects was divided into six groups. These groups were numbered from A through F. Further classification within each group involved men, women, different age groups, varying body weight, tobacco users and non-tobacco users. Each group was tested for the genotoxic effects due to over consumption of arsenic. It was observed that the groups where arsenic concentration was over 200 μg/​kg, i.e. groups D, E and F, showed significantly higher genetic damage than groups A, B & C. A step-wise correlation was observed between the arsenic concentration and genotoxicity. Another important observation of the study was that arsenic concentration in water consumed by the families was such that water borne arsenic contributed to no more than 20 percent of the total arsenic consumed. This eliminates water as the source for arsenic induced genotoxicty.

The study was conducted in rural West Bengal primarily because of the uniform diet of the locals, common method of cooking rice, variation in the concentrations of arsenic in rice observed and most importantly rice being the staple crop throughout. Arsenic content was monitored in the rice consumed as well as drinking water by collection of cooked rice and water samples for each of 400 individuals. Arsenic content was estimated from urine samples and genotoxicity was tested using the micronucleus assay. (A micronucleus is a short DNA fragment that does not get incorporated into daughter genes during cell division; these micronuclei are indicative of genetic damage). The observations were uniform throughout the sub-groups, thus validating the claims that arsenic is responsible for genetic damage.

This is the first study that has brought to light the risk of arsenic consumption through rice. The provisional tolerable weekly intake of arsenic is limited to 2.1 μg/kg-body weight/​day, which comes to 105 μg/​day for an average body weight of 50 kg. This could result in severe genotoxic effects especially because rice is consumed almost daily in rural areas. The researchers also find that the risk posed to the rural population is much higher as they often suffer from folate, protein and fibre deficiencies, highlighting the severity of the situation. Arsenic toxicated rice is not a problem endemic to India, it is a problem faced worldwide by a population of about 3 million consuming rice on a daily basis. Yes, it is difficult to reach out to rural areas and regulate age old practices, but this study clearly calls out for immediate measures. Rice, being a staple food, has to be given absolute priority and returned to its original quality. Health officials must immediately take steps to curtail the arsenic concentrations and prevent severe genetic damage that could affect generations to come.