Every year, the picturesque town of Lindau in Germany teems with Nobel Laureates and a few hundred young scientists. In its 65th year, this edition of the Meeting is dedicated to interdisciplinary science. The Meeting is designed to foster interactions across generations, cultures and disciplines. Morning lecture sessions are followed by intimate interaction sessions in the afternoons where a few young scientists meet with a Laureate. Panel discussions peppered through the week focus on issues such as Science and Ethics and Leadership in Science. We bring you daily highlights from the Meeting…

Snippets from Day 1 and Day 2

Students kept busy on the third morning of the Meeting shuttling between various parallel sessions of talks. ​“I’ve learnt so, so, so much already,” said one young graduate student from Colombia. Another was impressed at how easy it was to strike up conversations. ​“Everyone is so polite and approachable, even the Laureates. There are people from so many different countries here. It’s amazing,” he exclaimed. 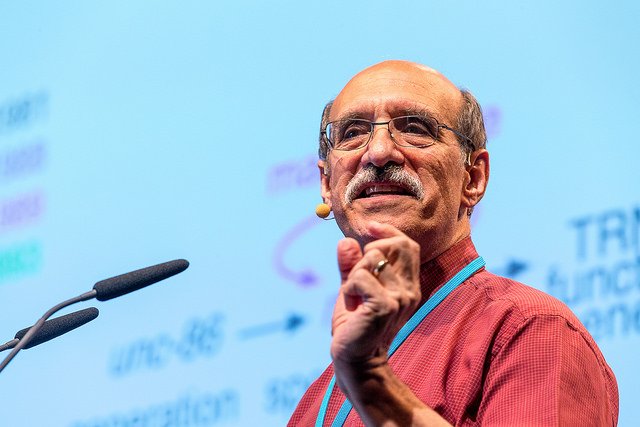 When it was time for Martin Chalfie to give his plenary talk, the Bayern Hall at Inselhalle filled to capacity. He began by warning the audience that he will not be talking about the Green Fluorescent Protein (GFP), for which he got his Nobel Prize. ​“It’s all on the web, you can look it up easily,” he said. He wanted to talk about another problem that he has been interested in for decades, on decoding the sense of touch, using C. Elegans as the model system. ​“What sensitive piece of equipment do you think we use to study sense of touch in 1mm organism?” he asked. ​“Well, it’s an eyebrow hair stuck on a toothpick.”

By studying about 500 touch sensitive mutants, 6 cells and 17 genes needed for sensitivity have been identified. He has gone on to find out how cells differentiate to have this specific function, and how cell fate is maintained. Among these cells there are subtypes, and a lot of work has gone into understanding how these subtypes arise. Hox genes have been found responsible and we now know the pathway, but some mysteries remain. What determines where a gene is expressed, for instance, is unknown.

“What I really have stumbled into in this work, which has taken decades of my life is Hershey Heaven: To have one experiment that works and keep doing it all the time,” said Chalfie in summary. Chalfie and his team have done experiments again and again on the same system and learnt something new every time.

A press talk on the ​“Future of biology” was held in the afternoon, open only to bloggers and journalists. The panel, which had Venkatraman Ramakrishnan, Jack Szostak and Arieh Warshel, was asked which one problem they thought could be solved in the next 50 years. The answers ranged from memory storage in the brain to beating drug resistance.

The discussion then moved on to the importance of tools and technologies that will enable us to find answers to open questions, and whether most science will become collaborative in nature. Ramakrishnan was of the opinion that while there would be problems that could only be tackled by large teams of researchers, science would always have the space for individuals who pursue good ideas on their own, or with very small teams.

Science communication was unanimously recognized as essential, especially in the context of getting better funding for important projects. The session concluded by alluding to some of the problems faced by the army of young students training to be scientists. There are big questions to be investigated, but many don’t find a place to pursue these questions. To avoid these mixed messages, more forethought needs to be put into scientist training, suggested one of the panelists.

Thursday was the last day of lectures and discussion sessions. Everyone was scrambling to try and meet the Laureate they’d missed.

The morning session had plenary lectures by William Moerner and Elizabeth Blackburn. Moerner began with a simple baseball analogy to illustrate the need to study single molecules. While team batting averages are an ensemble measurement, he said looking at individual players showed who the outliers were. ​“By studying single molecules, we can ask whether molecules are marching to different drummers or not,” he said. He went on to explain his work on super resolution microscopy and how it can be used to study single molcules. The highlight for many, however, was his live demo of fluorescence on stage with orange highlighter and a green laser pointer.

Elizabeth Blackburn followed, and took the audience with her on her ​“journey from pond scum to the mind”. Early in her career, she became interested in the telomere, ​“which is like a cap at the end of the chromosome”. The telomeric DNA structure was found to be a simple repeating sequence. The subsequent discovery of telomerase, the enzyme that replenishes telomeres, by Blackburn won her the Nobel Prize in 2009. More recently, Blackburn has led investigations that show that the lengths of telomeres have a clear disease impact. Longer telomeres statistically correspond to longer lives and longer ​“health spans”, while shorter telomeres are associated, more often than not, with impaired immune function and diseases like cancer and diabetes, among others. Clinical studies have also revealed that chronic psychological stress has an evident telomere effect.

A panel discussion on ​“Communication Overkill” was held that afternoon. The effects of media hype and miscommunication were discussed. Nobel Laureate Brian Schmidt stressed the importance of scientists taking time out to communicate their own work.

The much-awaited Bavarian evening unfolded that evening. A Bavarian dance performance and music accompanied a grand dinner. Many participants wore traditional costumes — there were kimonos and kurtas. An enjoyable evening stretched late into the night for many, with endless conversations in an atmosphere of congeniality.

Most participants headed out on a long boat ride that would take them to the island of Mainau in Lake Constance. The Meeting ended with 30 Nobel Laureates presenting a joint declaration on climate protection at the island. The Mainau Declaration 2015 calls for nations of the world to unite and take decisive and urgent action limit global emissions and tackle climate change.