Every year, the picturesque town of Lindau in Germany teems with Nobel Laureates and a few hundred young scientists. In its 65th year, this edition of the Lindau Nobel Laureates Meeting is dedicated to interdisciplinary science. The Meeting is designed to foster interactions across generations, cultures and disciplines. Morning lecture sessions are followed by intimate interaction sessions in the afternoons where a few young scientists meet with a Laureate. Panel discussions peppered through the week focus on issues such as Science and Ethics and Leadership in Science. IndiaBioscience bring you daily highlights from the Meeting…

The scientific programme of the Meeting started this morning with an energetic talk by Stefan Hell, who related his journey to achieving super resolution. He had resolved early on to break Abbé’s diffraction limit (which is, quite literally set in stone). The breakthrough came when he read about stimulated emission, which was, effectively, an ​‘off’ switch for fluorophores, or molecular labels.

So when a sample is labeled with fluorophores, a (green) laser turns ​‘on’ all the labels in a diffraction-limited area. Hell’s idea, which he demonstrated successfully over the next five years, was to use a ring of (red) laser light that would turn off some of these fluorophores using stimulated emission, leaving only a very small area of fluorescing labels, which could then be imaged. STED and other techniques that have brought the nano world into focus with microscopes have engendered a shift in the field — the quest for better resolution is no longer dependent better lenses. It depends, instead, on finding more effective fluorophores. ​“Light microscopy is about waves… and states,” he concluded.

Eric Betzig, who shared the Nobel Prize with Stefan Hell for ​“the development of super-resolved fluorescence microscopy” via a different technique, took the stage soon after. He introduced himself as a ​“tool builder by interest and inclination”. Forthright and engaging, he said, ​“I wanted to get into science not to do incremental things but make big impact. I like the idea of going into a field at its birth.” He candidly shared his tortuous route to the discovery of PALM, or photoactivated localization microscopy. In this technique, sparse subsets of fluorophores are turned on at random, and a stochastic sampling of many such subsets produces an image with a resolution better than the diffraction limit. 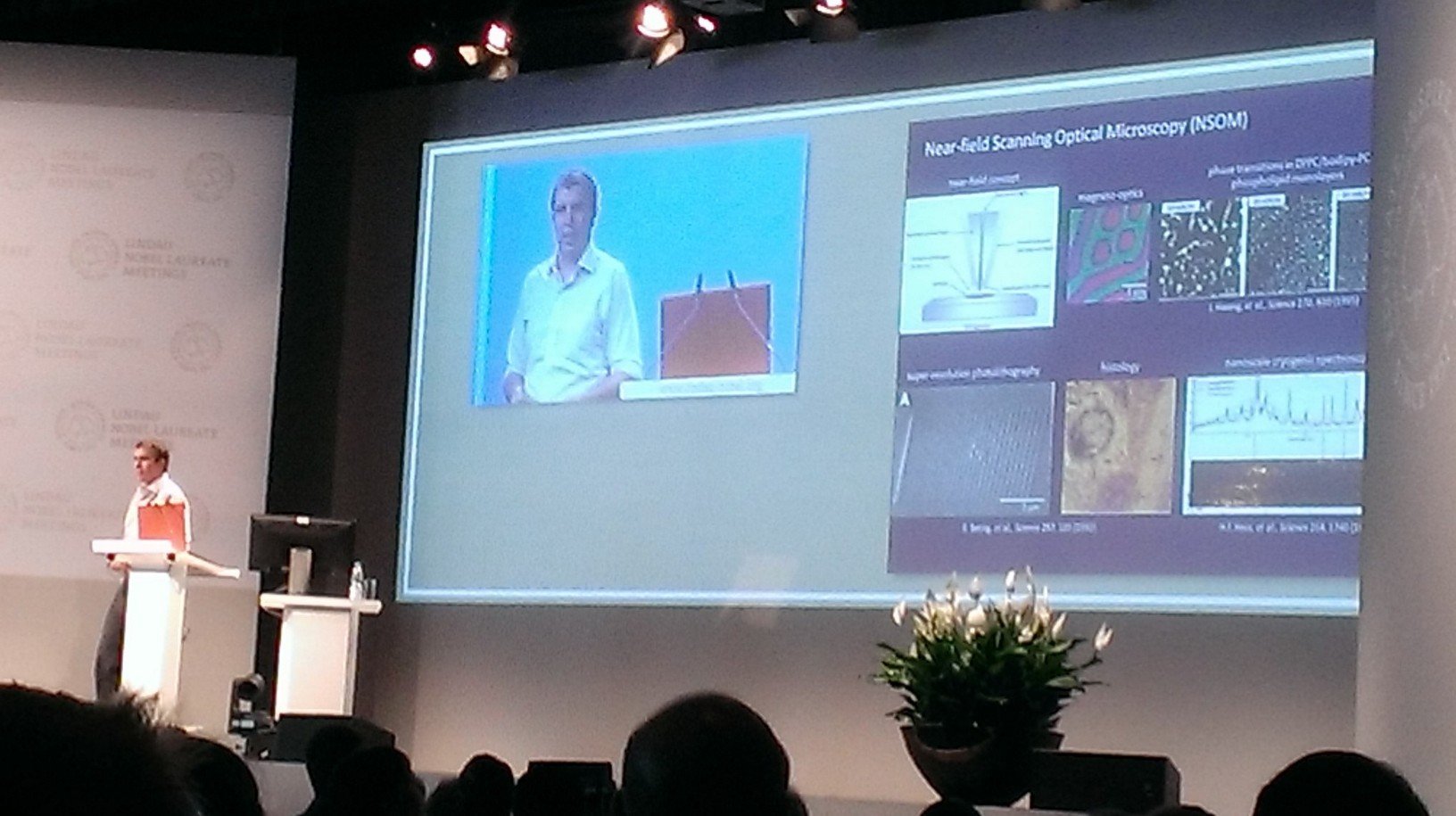 Betzig has since gone on to newer, more sophisticated microscopes that seek to overcome the limitations of first generation of super resolution microscopy. He pioneered a technique called Lattice light-sheet microscopy. ​“Everyone who has come to the lab to use it has left with big smiles and 10 TB of data. Of course, we never hear from them after, because they don’t know what to do with 10 TB of data,” he joked. He also touched upon another technique called adaptive optical microscopy, which may well pave the way for imaging deep inside biological tissues. ​“We are on the cusp of a revolution in cell biology. We have never studied cells as they are. We have to study the cell on its own terms. You can’t look at cells in isolation. You have to look at its environments and cell-cell interactions. That’s where adaptive optics will play a part,” he concluded to thunderous applause.

Betzig was followed by Venkatraman Ramakrishnan who won the Nobel Prize in 2009 for the ​“for studies of the structure and function of the ribosome”. He walked the audience through the history of how increasingly complex structures were solved with the use of X‑rays. Describing the technique invented by Max Perutz and John Kendrew to unravel structures of biological molecules, he said, ​“It’s a little bit like solving a jigsaw puzzle, except you don’t know the image beforehand since it’s not on the cover of the box.” He went on to describe how electron microscopy can be used to decode the structures of biological molecules with greater efficacy. Very soon, he promised, the revolution in electron microscopy will transform molecular structural biology significantly — the ability to crystallize the molecule will no longer be key.

The afternoon session was a lively panel discussion on ​“The quest for interdisciplinarity: inspiration or distraction?” Martin Chalfie, Eric Betzig, Stefan Hell, William Moerner and Steven Chu answered various questions on the rewards and challenges of interdisciplinary research. One point that they were unanimously emphatic about was that interdisciplinarity should not be the goal of research, the problem one studies should be the goal. ​“Wherever the problem leads you, you should go and learn the tools and techniques from collaborators along the way,” said Martin Chalfie. They also agreed that fostering interdisciplinary thinking and research shouldn’t be forced, but brought about naturally. Institutes and universities could encourage these by provide spaces for interaction. ​“I spent a lot of time worrying about the cafeteria while Bio‑X was being planned,” joked Steven Chu.

William Moerner stressed the importance of having deep knowledge in one field. ​“It’s the unity of the sciences that is interesting. The same concepts can be applied everywhere. It is important to master the concepts,” he said. Martin Chalfie acknowledged the important part played by students in learning. ​“Teaching and interacting with students have always been very eye-opening for me,” he said. He added that they are driving the change to interdisciplinarity by demanding to study subjects outside their disciplines. He concluded by saying, ​“Messiness is important. More people from more diverse backgrounds will generate more ideas.”

When the floor was opened for questions, it was clear that the young researchers are most concerned about advancing their careers in a climate that demands a breadth of knowledge, which takes time to accumulate, while having to demonstrate a high level of productivity in a competitive environment. The panel recognized the problem and worried that some of the issues stem from the system — there is a need to change the metrics of success in academia. ​“I worry about the trend of designing careers and optimizing CVs,” said Stefan Hell. Eric Betzig agreed: he said, ​“We need to do some soul searching about how we practice science.”