In the past decade scientists and conservationists have argued back and forth about the net effects forests have on global climate. G. Bala from the Indian Institute of Science suggests that while planting trees in the tropics could help ameliorate climate change, it is more important to reduce our dependence on fossil fuels.

Can planting trees help offset climate change? Although airline companies advocate that planting trees will reduce your carbon footprint, the results from mathematical modelling are mixed. In a recent editorial in Current Science, Govindaswamy Bala at the Divecha Centre for Climate Change at the Indian Institute of Science, Bangalore reviewed the past ten years of work that examines the effects of forestry on global warming. His conclusion: planting trees mayhelp ameliorate climate change, but it is far from a complete solution. Depending on context, afforestation may also hurt. 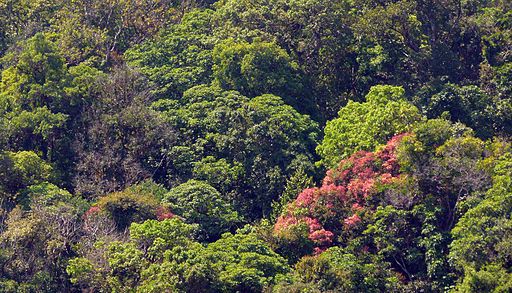 The notion that planting trees will help us cool the earth makes intuitive sense, which is one reason why this idea has grown popular. Forests act as carbon sinks, absorbing carbon dioxide from the atmosphere and thus partially offsetting our own industrial and agricultural pollution. They also cause local cooling through transpiration, as water travels from roots to leaves and evaporates into the surrounding air. Anyone who has walked down a tree-lined street will know the difference trees make to ambient temperature.

Global warming is not just a function of greenhouse gas density in the earth’s atmosphere, however, but also of the reflective capacity of the earth’s surface. The dark leaves and branches of forests absorb light, and consequently radiate more heat into their surroundings than reflective surfaces such as ice or snow. Taking all factors into consideration, severalmodelspublished in the past decade have suggested that global afforestation would have the net effect of warming up the planet rather than cooling it. This effect is location-dependent. Closer to the poles, where reflective snow cover predominates in winter, planting trees has a net warming effect. Closer to the equator, the effects of transpiration dominate, and planting trees has a net cooling effect on the globe.

Bala asserts, however, that this does not mean we should forget about protecting forests in the temperate to polar latitudes. Forests are beneficial in terms of the biodiversity that they foster and the human livelihoods that they sustain, Bala emphasises – they just are not an adequate solution to climate change. ​“Under high emission scenarios, trees don’t have the potential to remove the carbon that is coming from fossil fuels,” Bala says. If fossil fuel emissions continue to rise at current rates, carbon dioxide density in the atmosphere will reach 700 – 800 ppm by the year 2100, nearly twice what we have today. ​“When you reach that level, how much can planting trees actually help you?” he asks.

Rather, Bala suggests, we need to be diverting resources into the development of renewable energy sources. ​“I think wind and solar energy certainly have tremendous potential for countries like India,” he says, citing recent success stories from Tamil Nadu that have addressed power shortages in the state through wind energy generation. ​“We have reached only one tenth of the potential for wind and solar energy.”