It was 8:00 one Tuesday morning. Barely an hour before she was due to teach a class, Vinita Gowda, an Assistant Professor of Evolutionary Botany at the Indian Institute for Science Education and Research (IISER), Bhopal, found out that her nanny wasn’t going to come in to work. This wasn’t a small advanced graduate class — it was an undergraduate course attended by more than a hundred students. It would be difficult to notify them in time and impossible to reschedule the class. There was no one else Gowda could call in to care for her one year old daughter — she has no family in town and her husband, also an Assistant Professor, works at the Indian Institute of Science in Bangalore.

Gowda and her husband are part of the increasing tribe of academic spouses. As more women pursue careers in research and spend a large part of their 20s in graduate school, it is not surprising that they find spouses among fellow scholars. And soon after, the couples find themselves battling a few extra constraints and complications while competing in an already crowded academic job market — both would ideally like to find jobs in the same city, if not the same Institute/​University, but neither would want to compromise on research quality or work environment. They also grapple with questions that few have clear answers to — should they bring up the fact that their spouse is also looking for a job? Will that affect the selection process? Do Universities/​Institutes have policies (written or unwritten) against hiring couples? IndiaBioscience spoke to six couples in different Institutes across India about their experiences while applying, and also for some tips and pointers to young couples who will soon be looking for faculty positions in Institutes across the country.

Most of the scientists interviewed had gone abroad, either for graduate school or a postdoctoral stint. Some couples like Arati Ramesh and Sunil Laxman, recent recruits at the National Centre for Biological Science (NCBS) and inStem, Bangalore, respectively, were simply looking to good science, whether in India or the US. Others like Kundan Sengupta and Richa Rikhy, currently Assistant Professors at IISER, Pune were clear about returning even before their postdocs. ​“We never decided to stay,” they said. They kept in touch with their PhD mentors, gave talks and actively networked every time they came home. They still count themselves lucky to have secured jobs in the same Department.

Others like Gowda and her husband Ambedkar Dukkipati contend with the challenges of being in different cities. ​“Poor connectivity is the biggest issue,” said Gowda. While taking care of a baby alone is no piece of cake, often, she said, it is actually harder on the other parent, who is not around to celebrate the many milestones. In addition, there is a measure of social stigma that women who choose this route may have to contend with: many judge them for staying away from family on account of work. However, said Gowda, the facilities offered by IISER, Bhopal were great and her work has been rewarding. ​“It’s not the ideal situation, but it has been good so far,” she summed up. 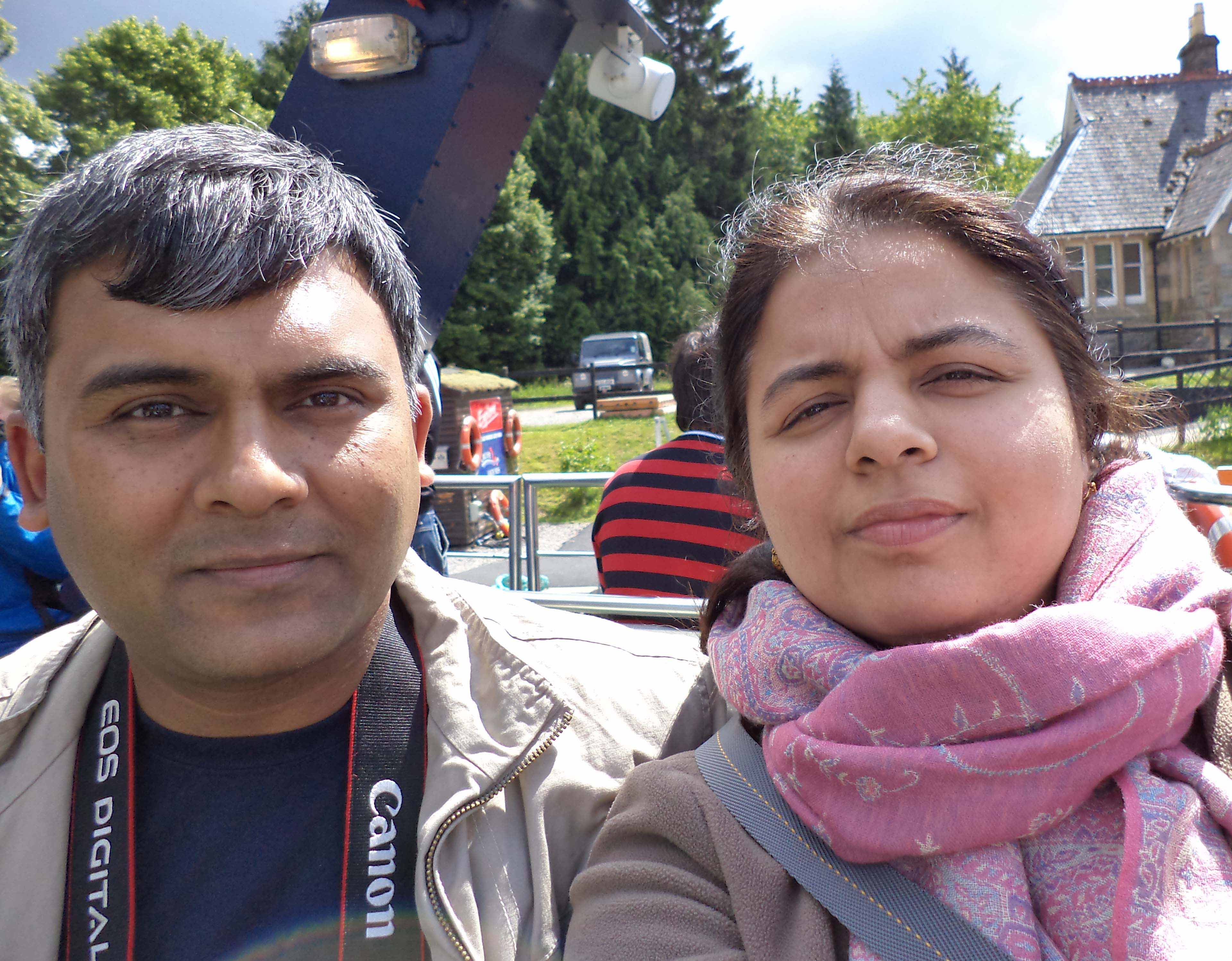 Three out of six couples that spoke to us were from IISER, Pune. The establishment of the IISERs about 8 years ago saw a sharp increase in hiring. ​“The beaker is getting a bit leaner now,” said Collins Assisi, also an Assistant Professor at IISER, Pune. Assisi and his wife Suhita Nadkarni (IISER, Pune) began their job search at the Young Investigators’ Meeting. ​“We got to meet Institute Directors and prospective colleagues, and got a lot of clarity about the various grants available to researchers,” said Nadkarni.

When asked how they approached the job search, most of them said they applied in multiple places, especially in cities like Bangalore and Pune, which have many Institutes. Many of the interviewees also emphasised the importance of applying for grants early, to make a stronger case during interviews. Advising patience, Suhita Nadkarni said, ​“It is better to wait it out than rush into accepting offers that are not completely satisfactory to both. Severe compromises are not sustainable.” Aurnab Ghose, IISER Pune, added ​“If you are in the same stage of your career, applying at the same time may increases your chances of being hired together in some places.”

Jonaki Sen and Amitabha Bandyopadhyay, a couple who share a joint lab space at IIT, Kanpur, cautioned, ​“Sometimes one spouse is hired and the other is promised a job later. Move only after both have offers, since it is not easy to change jobs in Indian academia.” They also recommend their joint lab model to prospective hires, when appropriate. While they both have different, independent projects, they share resources and a common lab space. ​“It helps us do more research for the same grant money,” they said. They had proposed the joint lab while applying, an idea that found ready acceptance at IIT, Kanpur.

“Did you bring up the fact that your spouse is also applying?” we asked the others. Ghose and his wife, Mayurika Lahiri, were among those who did, in every place that either of them was called for an interview. ​“Some Institutes responded very positively and even called the other spouse for an interview. We were careful to state that we were simply putting all our cards on the table, with no intentions of leveraging our position,” they said. At the other end of the spectrum were Ramesh and Laxman, who applied independently. ​“We both had long postdoctoral stints, and worked hard towards having good individual CVs. Some places hire couples, some have a policy not to. But there is a nebulous in between where it is not clear whether there is a policy or not,” said Laxman.

This came up repeatedly in our interviews. The interviewees were largely unsure whether there is a policy about hiring spouses in different Institutes. When asked, directors from several Institutes confirmed that there is no such written rule, but acknowledged that some places discourage couple hiring, especially within the same Department, since they believe it decreases the diversity of opinion, among other reasons. ​“Many of these objections can be countered with some thought,” commented Assisi.

What is in it for the Institutes? Should they accommodate spouses? ​“There are advantages in hiring couples,” said Ghose, voicing a popular opinion. It helps retain good researchers, and spouses have a better sense of the constraints on the job and end up buffering each other, added Assisi. ​“If each spouse is good enough to be hired, Institutes should not discriminate just because they are married,” said Mukherjee. Gowda, however, was not as emphatic. She gave the question some serious thought before she said, ​“It is a tricky question. I think they should, but there are issues that require some foresight and deliberation. There should be no compromise in the quality of hires on account of spousal accommodation.”

When asked what policy changes would have most impact, there was a clamour for transparency on existing policies, to begin with. ​“Being open to hire couples is just a mindset. Institutes are waking up to the need to address the issue. Better flexibility and open policies have made some of the newer places more attractive,” said Sengupta. Gowda points out that Institutes haven’t yet warmed up to hiring multiple people with the same specialization, even if their research doesn’t exactly overlap. This translates to fewer available positions, even in places where space or funding is not a constraint.

Creating a network of Institutes is also high on the wishlist. ​“Recruiters should talk to their neighbouring Institutes if they can’t accommodate both spouses,” said Ghose. IISER, Pune has already done so in a couple of instances, he added. ​“Having a couple in two different Institutes in the same city comes with many advantages. You can capitalize on the different positives from different places and also work together to increase interactions and share facilities at the Institute level,” said Rikhy.

A comprehensive report titled ​“Dual-Career academic couples: What Universities need to know” was published by the Michelle R. Clayman Institute for Gender Research, Stanford University in 2008. The report summary states, ​“In a recent survey of Canadian science deans, couple hiring emerged as one of the thorniest issues confronting their faculties. Administrators in this study concur. One department chair commented that no other aspect of his job arouses as much controversy as dual-career hiring.” Couples in academia are a rising trend, one that academic institutions simply cannot ignore. The Stanford report analyses the experiences of academic couples in the US in great depth and also makes recommendations for improving the way universities work with dual-career candidates. Universities/​Institutes in India could adopt many of their recommendations too. At the very least, institutions must recognize that there is an urgent need for open dialogue about couple hiring and transparency with regard to policies.

Elizabeth Hadly, Professor at Stanford University, and one half of an academic couple herself, said that even in the US, couple hiring is not as common as it should be, though some Universities fare better than others in this regard. In her opinion, ​“In India, where there is so much growth, new places should use this as an opportunity to get good people, and grow doubly quickly. This has an added advantage — they will also start off on the right foot in terms of gender diversity.”