With life-sciences becoming a global enterprise with mobility of scientists greater than ever, it becomes imperative at science meetings to have global outreach programs. In line with this idea, IndiaBioscience hosted an ​“India” session at the American Society for Cell Biology Meeting in San Francisco on December 17th with the support of the International Affairs Committee to enable attendees learn about research, training, and other opportunities in India.

To perform good research – money, a conducive atmosphere, manpower and support are essential. The session aimed to touch upon each of these aspects in the Indian context. Jitu laid the ground by presenting statistics on India’s funding landscape and showed the Indian government’s commitment to science and technology by scaling up funding for basic research. Money matters but more so does information on where the money is present, where the opportunities are, how does one break into Indian science, what is it like performing science in India and is Indian science good? My talk focused on IndiaBioscience’s role in addressing these questions and supporting Indian life-scientists. Mohan gave an objective perspective of Indian science as both; an outside observer as well as recounting his insights from serving on the boards of different academic institutions in India. Ron’s and Mohan’s account reflected the tremendous opportunities that are up for grabs and the excitement of a chance to shape the life-science community in India.

Following the short talks, the panel members fielded a plethora of questions comparing international and Indian scenarios, recounting personal experiences, explaining different types of institutions, networking in India, starting up a lab amongst others. With an enthusiastic 100 odd participants, many of who stayed on to network later on as well, the event was an informational hit.

Post- event, IndiaBioscience contacted the participants to understand if the participant needs had been met, what they had thought of the session and how we could better organize such sessions in the future.

3. Needs: Our survey results indicate information was sought on *

b) Career prospects at different levels – PhD, Postdocs and established scientists and both, academic and non-academic tracks (70%)

* Text analysis on comments. Responders could list any number of needs.

4. Satisfaction: As the survey results show, the majority of participants felt satisfied. This meant that though we touched the important chords, there was room for betterment. 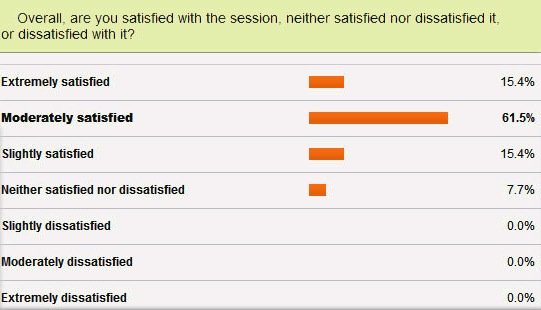 5.Suggestions: Including information on publications to give the audience an idea of the quality of work, infrastructure at new institutes, increased interaction time with panel members and careers ​“away from the bench” were suggested.

I would like to thank those that took the time to give us valuable feedback and from IndiaBioscience side, we assure you to incorporate these elements in our next offering.