The 2nd edition of Young Investigator Meeting-UK (YIM-UK) was held on 16 September, 2016 at the Cancer Research UK Cambridge Institute (CRUK-CI), United Kingdom. The event, like its previous edition, aimed to reconnect early career researchers (ECRs) of Indian origin working in UK with the leaders of research institutes, universities, funding bodies and industries and providing a platform to young researchers to pursue future science careers in India. More than 85 participants, mostly final year PhDs and post-docs from across the UK and other parts of Europe, attended the one-day meeting.

Aamir Mukadam delivered the welcome note on behalf of the YIM-UK organising committee. The introductory remarks were given by Shekhar Mande, Director, National Centre for Cell Science (NCCS) Pune, who briefed the audience about the history of Science and Technology policy in India. He also outlined the basic framework of scientific institutes and funding structure by the Govt. of India. On behalf of IndiaBioscience, Smita Jain gave a brief summary of the agenda and larger purposes of the series of Young Investigators Meetings happening in India and abroad. She also described a whole range of other activities that IndiaBioscience is engaged in with different communities.

The meeting was divided into four sessions. The first session was aimed at giving general information regarding academic organisations of India emphasising mostly on universities. Malabika Sarkar, Principal Advisor, Ashoka University, spoke about the interplay between Science and ​‘world of Humanities’ especially in the context of Science Education at Ashoka University. Sharmistha Banerjee from the University of Hyderabad briefed the audience about the scenario of teaching-research collaboration in the Indian central universities. She reminded the audience that teaching inspires fresh thoughts in researchers and leads to diversification of research topics. She also gave a summary of opportunities and research fellowships available at the universities. LS Shashidhara from Indian Institute of Science Education and Research (IISER), Pune spoke (via Skype) about the Indian economy transitioning from a service economy to a knowledge economy. He outlined the fundamental idea behind IISERs as changing the age-old exam-oriented learning into inquiry/research-based learning. He also elaborated on the recruitment process at IISERs, and how academic, infrastructure and mentorship support for new recruits help them to flourish as scientists. 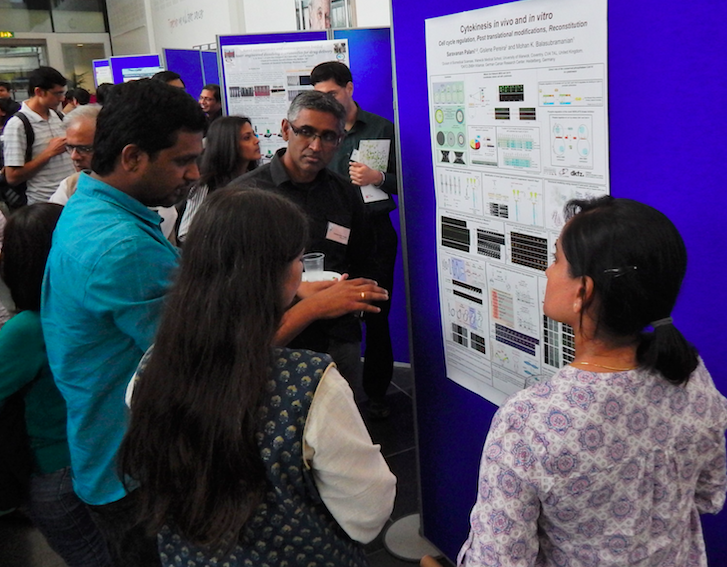 The second session was dedicated to discussing scope of research in Institutes and Industry. Manindra Agarwal from IIT Kanpur gave a brief history of IITs in India and outlined current opportunities arising due to recent massive expansion in the number of IITs. This was followed by an overview of personal and professional development plans in IITs that make them attractive places for young researchers to join. Shekhar Mande from NCCS, Pune spoke about autonomous institutes aided by Department of Biotechnology (DBT), with special emphasis on NCCS, its research goals and opportunities. Next, Sharmila Mande from Tata Consultancy Services (TCS) gave a detailed overview of the research focus and R&D activities of companies in India, with particular focus on the structural framework of research activity in TCS and career opportunities. The talks were followed by an interactive question and answer (Q&A) session on job opportunities and recruitment processes. Young aspirants asked the session speakers various questions; questions ranged from ethics in science, biobanking, scopes of interdisciplinary research in India, lack of plant science research in IITs, basic vs applied science in IITs and many relevant issues. Manindra Agarwal suggested that it will benefit both the researchers and the organisations across the country if applications are made based on matching infrastructure and directions of research. The session was followed by an intense discussion during poster session where the postdocs and senior PhD students from different institutes in the UK presented their work.

Fellowships and funding in the Indian research landscape were the focus of the third session. Shahid Jameel, CEO of the Wellcome Trust-DBT India Alliance, gave an engaging talk on how recent funding opportunities are transforming young scientists into future leaders. He emphasised on the necessity of both basic or fundamental research as well as applied or use-inspired research in any country; he reminded the audience that a diverse range in research is critical for the big breakthroughs and ground-breaking discoveries: ​“There is no peak without a range”. He elaborated on the nature of fellowships offered by Wellcome Trust-DBT India Alliance to scientists at various stages of their careers, and presented statistics and distribution of these fellowships across India. He discussed the recent endeavours of India Alliance on Leadership Workshops, Nature Masterclasses, Science Communication Workshops and India-Africa Health Sciences Meet. Speaking on behalf of DBT, Suman Govil talked about its mandate, and various funding schemes with special emphasis on schemes directed towards women in science, like the Women Scientists Awards and Bio-CARE. Ann-Marie Glynn from EMBO summarised the short and long term research funding opportunities now available to Indian researchers through the recent DBT-EMBO partnership. The three speakers of the session answered questions from the audience in the Q&A session.

The final session was aimed at giving the audience a flavour of career graphs of internationally renowned UK-based scientists of Indian origin and their perspective of Indian science. The session was chaired by Bhaskar Vira, University of Cambridge Conservation Research Institute (UCCRI), UK. Two eminent scientists were invited to present their research, success stories and their views on Indian Science. Polly Roy from London School of Hygiene & Tropical Medicine and Ramanujan Hegde from MRC-Laboratory of Molecular Biology spoke about how their careers were shaped by intelligent use of opportunities, constant decision making and an urge to do good science. Venki Ramakrishnan (popularly called Venki), current President of the Royal Society, joined the Q&A session with audience. An extensive discussion was led by Venki on how Indian science can flourish in near future by simple changes in the mind-set of policy-makers and young researchers. He suggested that postdocs explore new topics of research as independent researchers rather than extending their ongoing research, and strongly advocated that they take up India-specific topics like biodiversity, diseases etc. He also encouraged young scientists to engage more with the public through outreach programs, adding that this reconnection is more feasible through scientific discourse in local language.

The meeting ended with a networking dinner. The 2nd YIM-UK served not only as a career event but also emerged as a major international platform for scientific exchange, collaboration and discussion on scientific policies.