Posted on Sep 08, 2014 in Health & Medicine and Intellectual Property

Bacteria are staging a comeback. The ability of some bacteria to counter the effects of antibiotics, has led to the emergence of drug resistant strains. These bacteria continue to survive and multiply in the presence of antibiotics, and can no longer be controlled or killed by the drugs that were effective against their ancestors. 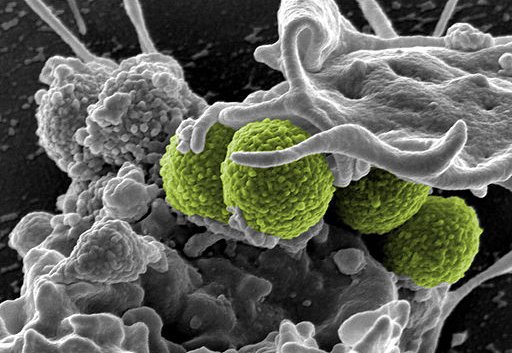 Research in the field attempts to understand the mechanism of how bacteria achieve such a feat, in order to devise better interventions to combat them. A class of antibiotics, the glycopeptides have been the warhead against a class of bacteria called gram positive bacteria (based on its ability to retain a particular type of stain). One such antibiotic called vancomycin has been used to treat an especially troublesome infection acquired in hospitals, prisons and nursing homes, the Methicillin-resistant Staphylococcus aureus (MRSA or golden staph). However the current global health concern over MRSA, warrants the need for improved treatment strategies against these infections..

Jayanta Haldar, whose group conducted the study says that ​“the potential for this kind of drug is immense as this works not only on acquired drug resistance, but we have shown for the first time that the vancomycin analogue also works against inherently vancomycin resistant bacteria such as gram negative bacterial pathogens. Thus, this kind of antibiotic can be used as a broad spectrum antibiotic. The elegant work by the group has shown that the presence of cationic moieties afforded superior binding of the drug to the cell wall and the additional hydrophobic moiety was able to efficiently disrupt the cell wall architecture. Haldar further suggests that the introduction of this new mechanism of action of vancomycin can significantly stall the development of resistance to the drug, due to the complexity of remodelling of the cell wall architecture required by the bacteria to overcome the effects of the vancomycin analogues.

In India, the onus is on journal publications, rather than patents, which have no bearing on one getting an academic job, promotion or even securing grants and research funds. It is noteworthy that in the Indian academic culture where most research is publication driven, Haldar aims to be a trend setter. He says that ​“the future potential for such a drug is immense and the clinical translation of such antibiotics can be enormous.” In spite of the recent focus on the development of antimicrobial peptides (AMP) to combat antibiotic resistance, the AMPs have higher toxicity in animal models, compounded with its high manufacturing cost that is attributed to the complexity of their synthesis. With the increasing global health concern over the antibiotic resistant bacteria, efficient drugs are urgently needed.

Patents are nevertheless the measure of productivity that would contribute directly toward tangible economic development. Collaborations between academia and industry have always been fruitful in fostering solutions to real world problems thus bringing about social benefits. A recent report from the American Association of University Professors (AAUP) details how such a model has aided in the development of numerous powerful methods, products and technologies. JNCASR, the owners of the invention may seek out licensing opportunities and explore the commercial aspect of the invention. AV Nagarathna, from the IP management cell says that, ​“In view of inadequate funding for R&D activities from the Government, generating revenue by way of licensing intellectual property either to already existing companies or spinouts or start-ups will help to supplement Government funding”. This model, adopted by prominent universities such as Stanford University, Massachusetts Institute of Technology (MIT), California institute of Technology (CalTech), Georgia Institute of Technology etc, would indeed be a desirable way forward for the Indian universities. For Haldar who spent five years at MIT before moving to JNCASR, the innovation-driven academic culture is nothing new. It is indeed time for us to learn from such Universities that have made global impact through their start-ups and technology transfer.