On the surface, Prakruthi restaurant at the Indian Institute of Science (IISc), Bangalore might seem to have little in common with the city of Faridabad, Haryana. The former is part of a narrow, oblong building of advanced age that has, over the years, accumulated a bookstore, counsellor’s office, air-conditioned travel agency and a printing and binding shop, all living in quiet harmony with each other. Prakruthi tacked itself on to the building in recent years, reanimating the ghost of the old Coffee Board. The restaurant has grown, with time — spilling onto the pavement and repurposing the adjacent, now extinct Tea Board to supply idlis and dosas to hungry campus-dwellers.

A little over two thousand kilometres north of the building that holds Prakruthi, but only a few years apart in age, Faridabad was planned post-Independence to accommodate refugees and industries from Delhi — a city already overwhelmed by the influx of Partition refugees.

What the two have in common, Prakruthi and Faridabad, is the mind that imagined them. Like the people whose cities he planned post-1947, Otto Koenigsberger was a refugee who never returned home. Koenigsberger found employment as a young architect in Bangalore on the eve of World War II, after being forced out of Germany by the Nazi Régime’s anti-Semitic policies. Over the course of twelve years in India, he honed his design skills building schools, bus stands, structures for the war effort, and planning cities and affordable housing for other exiles like himself post-Indian independence. He later moved to England, where he lived until his death in 1999. 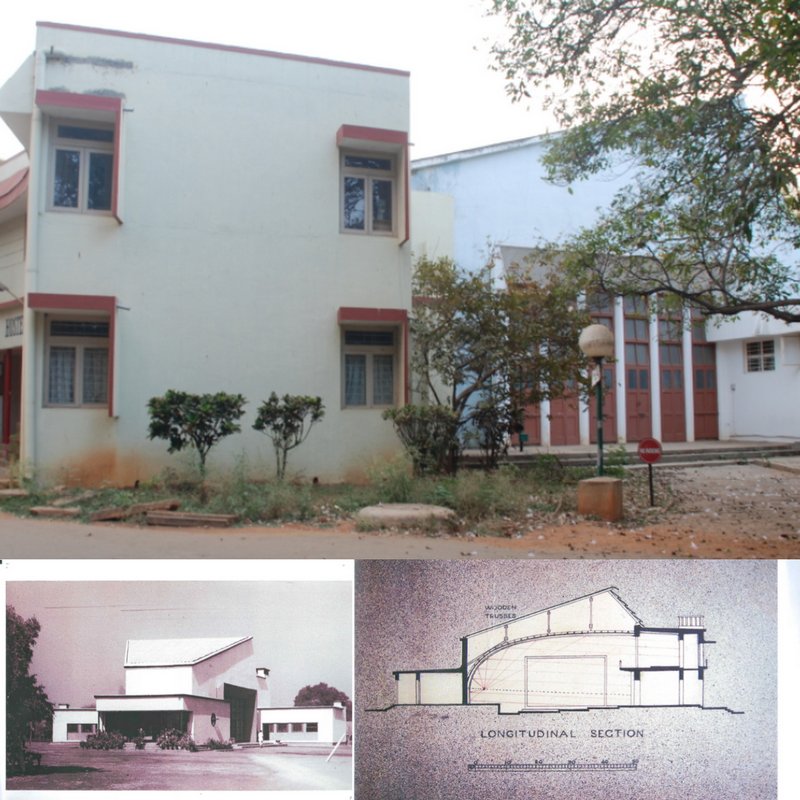 Koenigsberger’s architecture, which combined Indian styles with European functionalist trends, is still clearly visible on the IISc campus. Although Koenigsberger’s connection with the Indian scientific establishment in the 1940s is now largely lost to public memory, a Scottish architectural historian named Rachel Lee has found archival traces of the man’s footsteps in the last decade. She posits that Prakruthi’s serving area once accommodated the loading dock of a hydrogen plant designed by Koenigsberger at IISc — commissioned by the Royal Air Force during World War II for reasons unspecified, but probably to supply hydrogen for airplane fuel. Koenigsberger also constructed the swooping curves of IISc’s present day hostel office, formerly an auditorium cum dining hall whose vegetarian and non-vegetarian wings survive as Kabini canteen and Nesara restaurant. Although the seventy-year-old auditorium is used for little more than the occasional blood drive and orientation session today, its acoustics were once perfected by Koenigsberger and electro-acoustician N. B. Bhatt. Together, they devised structural innovations to compensate for wartime concrete shortages. Koenigsberger designed the old Aeronautical Engineering department as well, along with its closed-circuit wind tunnel — the first of its kind in India. As with the rest of his creations, Koenigsberger designed the Aeronautics building for natural climate control, a feature forgotten by the department’s current glass-intensive incarnation.

These structures and the mind behind them provide an intriguing lens on the Indian research establishment in the 1940s. German Jews with the means to leave Nazi Germany scattered to all corners of the planet in the 1930s, but only a handful ended up in India. What brought Koenigsberger to Bangalore was an academic network revolving around IISc — the same kind of scholarly web that, elsewhere in the world at the time, saved the lives of German Jewish academics from Albert Einstein to Richard Courant. The global connections that send researchers around the world for collaborations and conferences go beyond nation and religion — and thus when called upon, can provide life-saving refuge from persecution.

Lee found that in Koenigsberger’s case, the link to India came through his uncle and fellow exile, Nobel-prize winning physicist Max Born. While teaching at the Indian Institute of Science in 1935, Born recommended Koenigsberger for the post of the chief architect of Mysore State. Through his uncle, Koenigsberger also struck up a friendship with physicist Homi Bhabha — Born’s colleague at Cambridge, relative of the influential Parsi Tata family, and, following the outbreak of war in Europe, professor at IISc. ​“Homi Bhabha was a doorway into the powerful realm of India’s industrial, cultural and political elite,” explained Lee in a 2012 paper. Through Bhabha, Koenigsberger left an architectural mark not just at IISc, brainchild of the Tatas, but at Bhabha’s own institute — the nascent Tata Institute for Fundamental Research (TIFR), Mumbai, for which Koenigsberger drew up the initial plans.

Along with Koenigsberger came European ideas about modernist architecture, which met with and mixed with Indian styles in his hands. The modernist school of design, to which Koenigsberger adhered, argued that the form of a creation should be determined by its function. Here, aesthetic appeal derives from functionalist precision rather than extraneous ornamentation. These ideas turned up elsewhere in India in the mid-20th century, with the likes of French urban planner Le Corbusier (designer of broad-boulevarded Chandigarh) and American architect Louis Kahn (whose austere creations are evident at the Indian Institute of Management, Ahmedabad).

Koenigsberger extended the ideals of modernism during his time in India to argue for ​“scientific architecture” — architecture whose functionality is enhanced by scientific methods. He wanted methods, as well, that were adapted to local conditions of climate and resource availability. Consequently, Koenigsberger experimented with locally sourced materials such as teak during the resource-poor war years and integrated naturally climate-controlling features of Indian architecture such as overhangs (chajjas) and grilles (jallis) into his designs. The result was a cultural fusion still evident in the structures that he left behind. Lee found a creative ​“playfulness” in the old dining hall/​auditorium at IISc. ​“The wrap-around chajjas and large glazed openings are neither Indian nor European, but something new,” she said.

As chief architect of Mysore State until 1948 and then Federal Director of Housing for the government of newly independent India until 1951, Koenigsberger had far more on his plate than his work at IISc and TIFR. He designed many buildings in Bangalore itself — including Victory Hall (Bal Bhavan) in Cubbon Park, the now-demolished Kalasapalyam bus stand and a tuberculosis sanatorium still standing at present-day NIMHANS (National Institute of Mental Health and Neurosciences). When it came time for TIFR’s final plans he was tied up with work designing the cities of Faridabad, Gandhidham, Rajpura and Sindri to accommodate millions displaced by Partition.

After a plan to supply refugees with pre-fabricated housing fell through in 1951, Koenigsberger moved on to a job as a professor of Tropical Architecture in London. In the years since then, his name has slowly been forgotten in India. Architectural historian Vandana Baweja has pointed out that unlike in the case of Indian architects, Koenigsberger’s name is even absent from the foundation stones of the buildings he designed in Mysore State.

Proponents of modernism such as Koenigsberger would, perhaps, be the last to argue that we should cling to the past. The austere architectural style that he and others took across the globe was a deliberate move away from the ornate trappings of empire, meant to point towards a better future. But today, that very simplicity of style may have lent itself to historical amnesia of a different kind. More than its environs, the Indian Institute of Science is mindful of its own past — but the Institute likes to represent its history in the colonial grandeur of structures like the hundred-year-old Faculty Hall. The simple lines of Koenigsberger’s Metallurgy department do not stand out, and can be difficult to find.

At the same time, however, the fate of Koenigsberger’s works may be a better testament to his intention than their devout remembrance. He designed buildings that were meant to be used to the full — and that they have been. Every inch of the old hydrogen plant at IISc, most likely meant to aid in the bombing of Asia and the South Pacific during World War II, is now actively used for eminently peaceful purposes. A few visitors might wonder at the shape of the place — why such high ceilings and narrow corridors? What could possibly have stood here before it housed the Tata Book House? But such is the way of old structures, built to last: they metamorphose with time until only the stone remembers.