Posted on May 08, 2013 in Teaching, Research and Mentorship

Richard Losick, professor of biology at Harvard University and a Howard Hughes Medical Institute (HHMI) professor, is as passionate about teaching and mentoring young students as he is about science and research. ​“I am a better scientist for being a teacher”, he said during his inspiring talk at the Young Investigators’ Meeting at Jodhpur. His eagerness to mentor young undergraduates found expression in the unique, HHMI funded program he pioneered, called Increasing Diversity and Education Access to Sciences (IDEAS). ​“The best way to learn science is to do science”, said Dr. Losick. His program seeks to pair first year undergraduate students with a research lab, to give them a flavour of real scientific research under the expert guidance of a caring mentor. Friendly and approachable, he readily agreed to chat with IndiaBioscience about his varied interests. 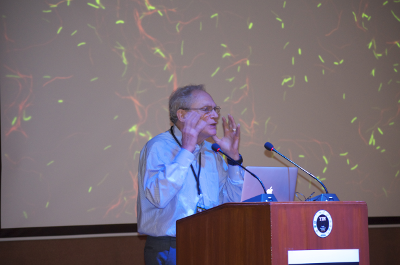 Who are the students for whom the IDEAS program is primarily designed?

IDEAS is principally aimed at students from diverse and disadvantaged backgrounds, broadly defined, liberally interpreted. I have students from under-represented minorities, undocumented students who face difficult circumstances. We also have students who are Caucasian, but have come from impoverished communities, students from all over the world. Harvard gets a very diverse student body. And not all of the students come with the same strong educational background that some other students do.

Do you identify the students who would most benefit from the program or do they come and talk to you themselves? How does that work?

I have multiple sources of identifying students. Let me back up here and say that the goal, the thing that I’m sensitive to is that minority students are underrepresented in the sciences in the US. Harvard attracts outstanding, gifted students from diverse backgrounds. It’s important to make sure, you know, that those that come to Harvard with an interest in science, stay interested in science.

In answer to your question, they come to me in different ways. The admissions office in Harvard knows about my program, so they give me a list of names. Sometimes other faculty give me names. Sometimes even other students already in the program come to know about students or tell students to come and see me. So I have a network at this point. I ask these students to write essays and I interview them. The most important criterion for me to include them in the program is that they are already excited and enthusiastic about science. It’s then my job to make sure that they don’t lose that, that we don’t spoil it for them.

Matching them up with mentors must not be easy. At the undergraduate level, they may have a broad interest in science but unsure about exactly what they want to work on. Their interests may also change. How do you deal with that?

[Smiles] It is my platonic ideal that I made such a perfect match that the student stays in the same lab for three and a half years. Of course, it doesn’t always work out that way. First of all, it’s my view that students think they’re interested in this or that, but if you get into almost anything deeply, you get really excited about it and stay with it. But sometimes, students’ interests do change or it’s not a good match, so I’ll help them find a different lab. Sometimes, despite all my best efforts, I can’t keep them in science, I can’t keep them in a lab, but that’s ok.

How did it all begin?

Well, it’s funded through the HHMI which had, about 12 years ago, a competition for what are called HHMI professors who received funds for educational activities of different kinds. I’ve always had an interest in diversifying students and helping to make sure that under-represented minorities are engaged in science. Maybe, I don’t know, in part because when I was in school, I went to a school that was very diverse and my biology teacher was an under-represented minority. He taught me and he got me very excited about science when I was very young. So maybe I’m giving back a little bit.

That’s fantastic! Not many people get the opportunity to do that.

I feel very passionate about students at Harvard joining labs, so I spend a lot of time anyway, outside of my program, trying to help students find host labs.

At breakfast the next morning, Dr. Losick mentioned that one of his IDEAS students had secured a reputed Fellowship that would enable her to pursue higher studies in mathematics. His visible excitement and happiness on receiving the news was truly touching.

Teaching plays an important role in keeping students interested in science. It must be difficult to engage a large classroom of students. What can teachers do to be more effective?

It’s very interesting to me that contrary to what people think, it is the sciences that are leading the way in how we teach and in assessing effective teaching, not the humanities or the social sciences. There’s a number of important leaders. One is a woman named Joe [Handelsman], also a HHMI professor who has written a very influential book called ​‘Scientific Teaching’. It’s kind of a play on words and has a lot of great ideas. Physicists have been very active in this. One of my colleagues, Eric [Mazur], invented clickers as a way to promote active learning. Carl Weiman, who won the Nobel Prize in Physics — after he won the Nobel Prize, he completely devoted himself to teaching, active learning and he invents various kinds of web-based learning modules and he assesses them.

I’m not an expert on cognition, but I think the important idea is that students can be expected to learn more on their own while the classroom can be used to engage them about thinking and applying concepts, rather than just rote learning.

I’m going to switch gears here and ask you to tell me about your research interests.

I’ve been doing science for a long time. I grew up in an era in which biology was seen largely as deterministic. There were regulatory pathways for cells to differentiate, for genes to be turned on and off. My specialty is the study of gene regulation in complex pathways, when cells differentiate from one type of cell into another type. I’ve always studied this in bacteria, where there are powerful tools and especially in a particular bacterium, B. subtilis. I didn’t plan it this way, it just turns out that this bacterium is much richer in interesting biology than I could’ve imagined. It does all kinds of different things. That’s what I’ve always done and I still do that, but recently we’ve realized that this bacterium also has a kind of differentiation process that seems to be stochastic.

What does that mean?

It means that instead of being deterministic, the differentiation seems to be driven by a noise driven switch. This has become a topic of great interest to my lab in the last several years.

We worked out the regulatory circuit that governs this particular switch, which involves the cell switching from a particular state in which they’re mobile, to a state in which they form long sessile chains (they can’t swim) and we think that the reason they do this is a kind of bet hedging. The bacterium can’t predict the future, so the chains stick to some surface and exploit the niche. At the same time, they’re throwing off mobile cells. These are nomads that go looking for new niches where there might be better food sources and so forth. Evolution selects for the genome and not the individual, so it’s switching back and forth. The key observation is that it seems to do this without influence of the environment. We know the regulatory circuit, but thing is to prove that this is really stochastic. And so we built a device in which we could hold the bacteria under constant conditions for many days, while they’re growing and dividing.

Can you tell me a little bit about the device?

Well, we create microfluidic channels that are just the right size to hold the bacteria and we can wash them with fresh medium in these channels, so they’re under constant optimal conditions. Then, we have fluorescent reporters like GFP attached to genes that represent one or the other state, so in our case the genes switch from green to red and back to green when they switch states. The channels maintain a constant environment and we count the states using fluorescence microscopy. We have a single cell trapped. So we can follow the same cell over time.

And what do you observe?

We could watch them switch while they’re held under rigorously constant environmental conditions and then ask whether the switching process is truly stochastic over many, many generations. We can do this for six or seven days. The bacterium, under these conditions, divides every 25 minutes or so. We can follow it for a very, very long time. We can see and know that it is stochastic, that the optimal solution for the bacterium is to hedge its bets. But why it evolved like this, that we can’t know for sure. We can just make a guess about it.

So the best guess is that the bet hedging works out for the bacterium in the long run, rather than choosing and propagating one model that works out for an individual or a generation. Is that correct?

Right. There were other examples of this, of what’s called bet hedging. There’s an important example in pathogenesis where if you take an antibiotic it kills off the bacteria the actively growing bacteria. So there are some pathogens that just spontaneously throw off some cells that stop growing, stochastically. Why would it make sense to stop growing? You see, when an antibiotic appears, the ones that have stopped growing survive, whereas the ones that are actively growing get killed. And when the antibiotic is gone, the ones that stopped growing can resume growth! So it’s hedging its bets, just in case an antibiotic shows up.

I hope you have enjoyed your time at the YIM. From what you’ve heard so far, do you have any observations to make about science in India?

It’s terrific that India is investing in science, but I fear that these investments are separating science from teaching. That is not good. Instead of building separate institutes, they should take the same resources that they have and pour them into the universities and colleges. Or build institutes right next to universities and make sure that scientists from the institutes are also engaged in teaching and that students in universities have opportunities to interact with the work at the institutes. Or give faculty in universities research funding and facilities for doing science so that there is a culture of science in the colleges. Not everyone has to be doing science but there should be active scientists who care and are involved in teaching. I’m saying this on the basis of 3 days of observation, so I’m no expert. The United States gets many things wrong, but this is one of the things they have managed to get right. For example, Howard Hughes Medical Institute Investigators are embedded in universities. They’re mixed in with teaching. Just promoting great science without considering the feedstock, the students, will backfire in the long run.