Hunting and entanglement in nets could severely compromise the future of dugongs in the Andaman and Nicobar seascape.

The dugong or sea cow (Dugong dugon) is one of the rarest and most threatened marine species alive today. Because it is elusive and difficult to study, knowledge of its global population status and distribution has remained limited. Now, a new study published in the journal PLOSone [ref] finds that dugongs have disappeared from 60% of their former range in the Andaman and Nicobar archipelago in the last 20 years. 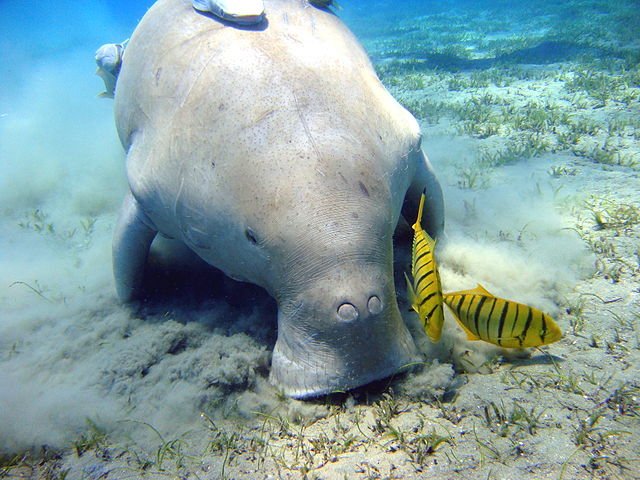 The study published by Elrika D’Souza and colleagues at the Nature Conservation Foundation, Mysore is the first to combine historical (1959−2009) and current (2010−2012) data from the archipelago to estimate long-term dugong occupancy trends. Surprisingly, the authors found that remaining dugong populations, now restricted to some sheltered bays and channels, were not limited by the availability of seagrass, their primary food item. It doesn’t seem to be habitat loss that’s driving this reduction in numbers.

The study suggests that it is mainly anthropogenic factors-hunting, entanglement in gillnets- that have contributed to a decline in species numbers over the years. The tribes of the islands place a high totemic and heritage value on the dugong and are legally allowed to hunt the animal. This, combined with illegal hunting by settlers and incidental by-catch in gillnets has severely compromised population numbers over time, and led to their local extinction around some islands.

The authors suggest that an effective management strategy will have to incorporate the protection and monitoring of areas where dugongs still persist, with a strong enforcement of bans on illegal hunting and high gillnet use. Finally, it will be important to motivate indigenous communities to set harvest thresholds or self-impose bans on hunting to allow local dugong populations to recover. It is only with the implementation of these efforts that dugongs in this region will have a fair chance at survival.